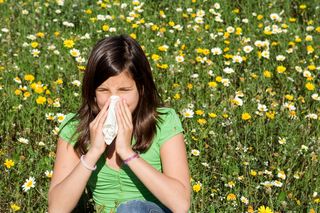 Spring allergy season is hitting people in the U.S. harder than usual this year, according to a new poll.

This month's percentage even tops the 2011 allergy season peak, which came in May, when 22.1 percent reported being sick with allergies on any given day.

The poll results are based on daily surveys asking U.S. adults, "Were you sick with allergies yesterday?" The data reflect about 30,000 interviews done each month.

March this year also saw a higher percentage of people reporting allergies than the month in previous years, going back to 2008. This March 19.6 percent of respondents said they suffered allergies, whereas in March 2011, 16.5 did, and in March 2010, 14.5 did.

"The 19.6 percent of Americans who reported allergies in March this year is closer to the rate usually seen in April and May of past years, suggesting allergy season arrived earlier than usual," according to the Gallup website.

The relatively mild winter experienced in many parts of the U.S. has been linked with the allergy season's earlier start and increased severity.

"The data confirm that the unusually high pollen counts recorded in many areas across the country in March and April have in fact triggered an increase in self-reported allergies," according to Gallup.

The poll was limited in that the results reflect self-reported allergy illnesses, not diagnoses made by medical professionals. Further, some people who take medications for their allergies may answer that they were not sick.

Pass it on: An early start to spring, and the allergy season, may be responsible for worse-than-usual sniffles this March.