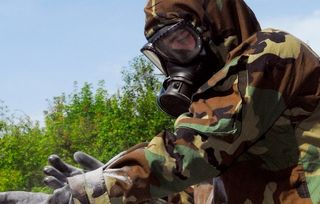 Whether soldiers want to avoid infection during the theoretical zombie apocalypse or just keep clean on modern battlefields, the U.S. Army has their backs. Military researchers have begun sniffing around the idea of specially treated clothing that could not only repel dirt, rain and snow, but also invisible threats from chemicals, bacteria and viruses.

The Army wants to take a closer look at "omniphobic" coatings that have proved capable of repelling all sorts of liquids and dirt in lab tests, according to its solicitation notice issued on April 11. Such technology could protect soldiers from almost every imaginable biological or environmental contaminant — but only if the Army can figure out how to make the coatings more resistant to daily wear and tear.

"It is envisioned that omniphobic treated protective clothing will help to protect the skin from contact with solid and liquid toxic industrial chemicals, petroleum, oil, and lubricants, chemical warfare agents, and bacteria and viruses, thus effectively providing enhanced chemical/biological (CB) protection," according to the Army solicitation notice.

Past lab tests by MIT and other universities have shown how specially engineered textures of omniphobic coatings can cause liquids to bead up rather than cling to the surface. Some researchers have experimented with natural surfaces — such as those of lotus leaves or spider hair — that can repel water and represent self-cleaning functions.

But current omniphobic surfaces don't meet "Army strong" standards just yet, because they can be easily scratched or worn away. The Army's Natick Soldier Research, Development and Engineering Center wants scientists to fix such material weakness before considering omniphobic technology for "potential applications in military clothing."

The Army also wants to ensure the omniphobic coating is thin and conforms well to clothing fibers without increasing fabric stiffness or affecting uniform color. Any treated clothes must also allow for air flow and moisture evaporation.

Regardless of whatever chemical or biological weapons appear on tomorrow's battlefields, soldiers may enjoy doing their laundry less frequently someday.