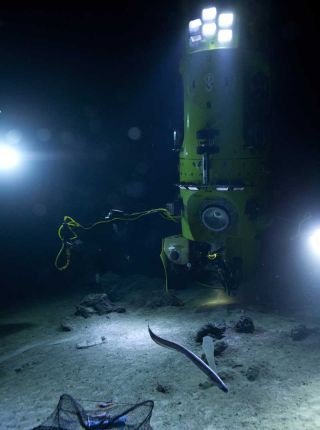 Just days after the filmmaker plunged more than 35,756 feet (10,890 meters) into the Pacific Ocean to the Mariana Trench, the deepest place on Earth, his team piloted Cameron's innovative submersible to yet another deep-sea spot.

This time, members of the expedition took Cameron's lime-green Deepsea Challenger to a depth of 3,600 feet (1,100 meters) off the coast of the tiny island of Ulithi, part of Micronesia.

The spot isn't far from place where Cameron made his historic dive on March 26, although it is only about a tenth as deep.

The image of the Cameron's Deepsea Challenger was taken by an unmanned seafloor "lander" — a large contraption that is baited, hoisted over the side of a ship and dropped to the seafloor. Once it's on the bottom, bait ideally lures seafloor creatures, and the lander's suite of instruments can take samples, photographs and data.

Cameron was slated to have a lander by his side during his Mariana Trench dive, but the plan was scuttled because of various mechanical problems, so Cameron went down to the bottom without any robot companions.

He spent about three hours in the Challenger Deep, the deepest part of the Mariana Trench. Humans had visited the deepest spot on the planet only once before, in 1960.

"It looked like the moon," Cameron told reporters with the National Geographic Society, co-sponsors of the mission, along with Swiss watchmaker Rolex.

"I didn't see a fish ... I didn't find anything that looked alive to me, other than a few amphipods in the water," Cameron told reporters upon his return.

In the image released today (April 6), things are a little more lively. A long, eel-like fish can be seen swimming in front of the Deepsea Challenger, and what looks like a cylindrical, translucent sea creature clings to the seafloor.

Scientists aboard the expedition's vessel say the submersible has collected many interesting samples from the seafloor over the course of 13 dives between Jan. 31 and April 3, but that now the long work of analyzing them begins.