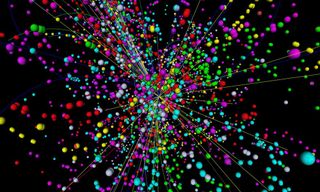 Physicists have started running the world's largest particle accelerator at a new record energy and taking the first data from these ultra-powerful collisions.

Protons zoom around the 17 mile (27 kilometer) underground loop of the Large Hadron Collider below Switzerland and France, and then crash into each other, dissolving into new and sometimes exotic particles. Scientists have now sped up those protons a bit more, sending them speeding toward each other at energies of 4 teraelectron volts (TeV), creating a collision energy of 8 TeV — a new world record.

"The increase in energy is all about maximizing the discovery potential of the LHC," Sergio Bertolucci, director of research at the LHC's home lab CERN, said in a statement. "And in that respect, 2012 looks set to be a vintage year for particle physics."

Ramping up to higher energies means the LHC has a better chance of creating the rare and highlysought particles it was designed to search for. These include the long-theorized, but not-yet-detected Higgs boson particle, as well as the particles predicted by a physics theory called supersymmetry. If supersymmetric particles are discovered, they may offer an explanation for the mystery of dark matter, the invisible stuff thought to make up most of the matter in the universe. [Wacky Physics: The Coolest Little Particles in Nature]

LHC was opened in September 2008, but shut off nine days later after an accident damaged a number of its superconducting magnets. The accelerator was fixed and got back up and running a little over a year later, and has been operating steadily since. Starting in March 2010, the proton beams have been colliding at energies of 3.5 TeV, creating a smash of 7 TeV.

"The experience of two good years of running at 3.5 TeV per beam gave us the confidence to increase the energy for this year without any significant risk to the machine," said Steve Myers, CERN's director for accelerators and technology. "Now it's over to the experiments to make the best of the increased discovery potential we're delivering them!"

The increased energy should mean more Higgs boson particles are produced, if they exist. Already, scientists at two of the LHC's experiments, Atlas and CMS, have seen promising indications of an excess of particles weighing around 125 GeV (gigaelectron volts) — potentially a sign of the Higgs. Yet physicists say they don't have enough data to confirm a discovery with certainty.

The increased energy should up the chances of creating Higgs particles inside the machine, though it will also create more of the "background" particles that produce similar signatures, and must be weeded out from the data.

Ultimately, scientists plan to run particle beams through the LHC at an astounding 7TeVeach, producing collisions of a whopping 14TeV. To do that, they'll need to refurbish the accelerator during a planned shutdown at the end of this year.