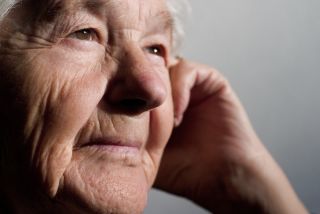 Memory decline speeds up in the two to three years before death of old age.
(Image: © absolut, Shutterstock)

Memory declines faster than any other time in the two-and-a-half years before death of old age, a new study finds.

In the years before death, the rate of memory decline speeds up eight to 17 times, according to the research. The study examined the brains of 174 Catholic priests, nuns and monks who had undergone memory testing for six to 15 years before their deaths. After death, researchers led by Rush University Medical Center scientist Robert Wilson investigated the participants' brains.

They found that the characteristic plaques and tangles of Alzheimer's disease (which occur before the disease is diagnosable) are not to blame for the fast rate of the decline. Alzheimer's tangles and plaques were associated with the decline starting earlier, but not with it going faster. That points to another culprit for the memory problems.

"The findings suggest that the changes in mental abilities during the two to three years before death are not driven directly by processes related to Alzheimer's disease, but instead that the memory and other cognitive decline may involve some biological changes in the brain specific to the end of life," Oregon Health and Science University professor Hiroko Dodge, who was not involved in the study, wrote in an editorial accompanying the new paper. "The study by Wilson and his co-authors deepens our understanding of terminal cognitive decline."

With further study, Dodge wrote, researchers could develop algorithms to detect and analyze memory changes to identify people in this terminal phase of life.

The study and editorial appear online today (April 4) in the journal Neurology. A second study, also led by Wilson, finds that mental activity can boost brainpower in old age. Slightly more than 1,000 elderly people with an average age of 80 underwent yearly memory exams for five years, reporting how often they read, wrote letters, visited the library or played board games.

Unsurprisingly, people's participation in these activities was linked with mental function over the years: If one declined, so did the other. But the decline in activity predated the decline in memory function by a year, pointing to a causal relationship, the researchers found.

"The results suggest a cause-and-effect relationship: that being mentally active leads to better cognitive health in old age," Wilson said in a statement.