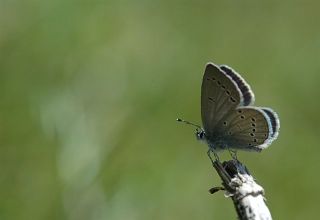 As climate changes, some butterflies take to the forests to shade themselves from the heat, new research suggests. However, not a large enough number of butterflies are making the move to save their populations, the researchers also found.

"A lot of the butterflies we were looking at are threatened by climate change. With the warmer temperatures, it will be too hot for a lot of them to survive in southern Europe," study researcher Andrew Suggitt, a graduate student at the University of York in the United Kingdom, told LiveScience.

The researchers were looking to see if the butterflies would move toward warmer or cooler areas of their habitats — like say a wooded, shaded area instead of an open, sunny field — depending on the temperatures.

They analyzed data on 36 species of butterfly collected between 1994 and 2009 from monitoring programs in the United Kingdom and Spain. They specifically looked at the number of species and individuals in closed, shady habitats versus open, sunnier habitats. Then, they compared this information with the average temperature for the season, finding that higher proportions of individuals in the cooler, closed habitats more frequently in years with higher maximum temperatures.

"They were making more use of the cooler habitats to do what they need to do, things like mating, feeding and completing their lifecycle, when it's too hot to do that in the warmer habitat," Suggitt said. "The catch is that the actual proportion of butterfly population that can make the shift is quite small."

The researchers concluded that though the majority of butterfly species could make use of these cooler areas of habitat, not enough of the actual individuals are doing it to protect the species from climate change. It's likely that food and other habitat resources are keeping them in open, warmer areas, even though it may be too hot for them to survive.

This study will be published tomorrow (April 4) in the journal Biology Letters.