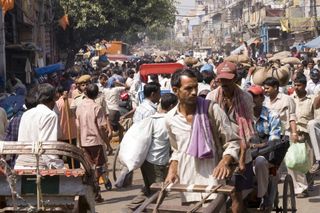 If current development patterns continue, cities will balloon by an area comparable to France, Germany and Spain combined by 2030, scientists say, greatly increasing the impact on the environment and putting humans at risk.

The urban spread is a numbers game of sorts: The United Nations estimates world population will grow from the current 7 billion to 9 billion by 2050, which translates into about 1 million new individuals on the planet on average each week for the next 38 years. Most of that growth is expected to occur in urban centers, researchers say.

Today's pattern of urban sprawl puts humanity at risk due to environmental problems, said Michail Fragkias of Arizona State University, who is a participant at the "Planet Under Pressure" meeting being held this week in London. [Can Humans Survive?]

While there were fewer than 20 cities of 1 million or more people a century ago, 450 such cities exist today, the researchers note. And even though such cities cover less than 5 percent of Earth's land surface, they have a significant environmental footprint. "The way cities have grown since World War II is neither socially or environmentally sustainable, and the environmental cost of ongoing urban sprawl is too great to continue," Karen Seto of Yale University said in a statement.

Seto added, "People everywhere, however, have increasingly embraced Western styles of architecture and urbanization, which are resource-intense and often not adapted to local climates. The North American suburb has gone global, and car-dependent urban developments are more and more the norm."

As such, conference scientists say focusing on energy efficiency in urban areas is critical. Some ideas include using weather conditions and time of day-adjusted toll systems to reduce traffic congestion, something that wastes fuel and causes pollution. Sitting in traffic also wastes time and therefore productivity, the scientists note; people sat in traffic an estimated 4.2 billion hours in the United States in 2005, the researchers said.

"Re-engineering cities is urgently needed for global sustainability," Shobhakar Dhakal, executive director of Tokyo-based Global Carbon Project, said in a statement, adding that newer urban centers "have a latecomer's advantage in terms of knowledge, sustainability thinking, and technology to better manage such fundamentals as trash and transportation."

Ultimately, the researchers say, solutions to improve the quality of cities include:

Meeting participants will address urban sprawl and other global sustainability challenges; they will then offer recommendations to the United Nations "Rio+1" Earth Summit in June.