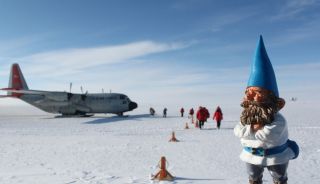 Here, the gnome is standing at the Antarctic South Pole. Turns out, the gnome (and you) weighs more at the South Pole than at the equator.
(Image: © gnomeexperiment.com )

There aren't too many gardens at the South Pole. But there are, apparently, garden gnomes.

A globe-trotting little garden gnome dubbed "Kern" recently visited Amundsen-Scott Research Station at the geographic South Pole in Antarctica. The inanimate traveler's trip was a take on the "Traveling Gnome Prank," a joke that's been in vogue since the 1980s, when pranksters started stealing garden gnomes and sending photographs of the statuettes in front of famous sightseeing spots to their owners.

Kern's travels have a scientific bent, however. The precision scale company Kern & Sohn is teaming up with schools and research stations worldwide to highlight the variations of gravity across the globe.

"Most people don't realize Earth's gravity actually varies slightly," Tommy Fimpel, one of the experiment's coordinators, explained in a statement. "One of the main causes is variations in the shape of the planet. Believe it or not, the Earth is actually slightly potato-shaped, so you'll weigh up to 0.5 percent more or less, depending on where you go."

Even glaciers can change an area's gravity; a mysterious dip in gravity over Canada is likely the result of now-melted glaciers that left behind an imprint from which Earth is still rebounding.

"We thought our Gnome Experiment would be a fun way to measure the phenomenon," Fimpel said.

So far, Kern has traveled, via the mail, to places as far-flung as Lima, Mumbai, Mexico, South Africa, San Francisco, New Caledonia, Sydney and the South Pole. [Photos of Globe-Trotting Gnome]

At the South Pole, where Kern landed last month, the gnome tipped the scale at 309.82 grams, his heaviest measurement yet. That's because the inertia produced by Earth's rotation is stronger at the poles, said Marie McLane, a researcher with the United States Antarctic program and Kern's "host" on the visit to Antarctica. Earth is also slightly squished in shape, with a bulge at the equator, so the planet is less thick at the poles, also contributing to a stronger gravitational effect.

Kern jetted off to Japan after hitting Antarctica, weighing in at 307.9 grams in Tokyo. His next stop is at Snolab in Canada, an underground research station 1.2 miles (2 kilometers) below the Earth's surface. From there, Kern will visit the Large Hadron Collider, the world's largest particle accelerator, at CERN near Geneva.

Kern's journey to Antarctica didn't only highlight the gravitational vagaries of Earth; it also shed light on the planet's elusive garden gnome population. The gnome's visit inspired McLane to do some detective work around the Amundsen-Scott Research Station. She found five little gnomes already lurking in labs and other spots around the station — including one, fittingly enough, guarding a greenhouse.

Kern's progress can be tracked at gnomeexperiment.com.