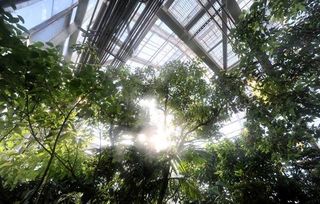 A new U.S. Navy lab can track every movement of battlefield robots as they struggle to survive arenas built to resemble scorching deserts, wave-pounded shores and tropical rain forests.

The lab's biggest environment has high-speed video cameras that automatically swivel to follow up to 50 ground robots, flying drones and even human soldiers. Such intense surveillance of man-made survival settings may remind science fiction readers of "The Hunger Games" — a popular book series turned Hollywood film(s) where "game makers" construct huge, naturalistic arenas to feature reality television displays of battles to the death.

Luckily, the NRL just wants to see how well humans and robots can cooperate, rather than oversee a futuristic death match. It officially opened its Laboratory for Autonomous Systems Research on Friday (March 16).

The biggest arena — about half the size of an American football field — allows the NRL's own game makers to change the simulated environment as they see fit. They can pipe in the sound of marching troops or a background environment, adjust the lighting to nighttime conditions, or even flood a 40-square-foot (12-square-meter) area to a 4-inch (10-centimeter) depth to make a shallow pool of water.

Robots must endure rain of up to 6 inches (15 centimeters) per hour inside a Southeast Asian rain forest setting, with temperatures averaging 80 degrees F (27 degrees C) and 80 percent humidity. By contrast, a second desert setting includes a sand pit, blowing winds and rock walls for robots to tackle.

A third setting combines a pool that's almost 6 foot (2 meter) deep with a wave generator — an arena that can simulate surf-like conditions on a sloping shore. Finally, an outdoor broadleaf evergreen forest allows robots to wander around a fourth setting with a waterfall, ponds and boulders.

The Navy's own robotic firefighter that stands like a human and throws extinguisher hand grenades is already being developed inside the new lab, Schultz said. That means it may also represent one of the first robots to run the gantlet in a number of extreme survival conditions.