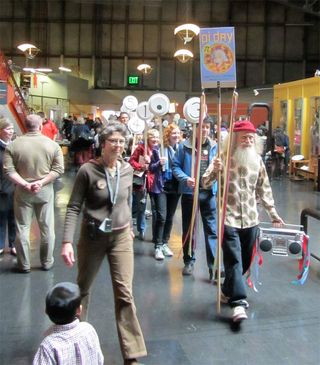 SAN FRANCISCO — For the poor souls who wandered unknowingly into the Exploratorium science museum here Wednesday (March 14), it must have seemed like a bizarre dream — perhaps one experienced after falling asleep during geometry class.

Several hundred people snaked through the museum in single file, holding aloft numbers scrawled on paper plates. Over the loudspeakers, an otherworldly, computer-enhanced voice chanted a string of numbers to the tune of Sir Edward Elgar's "Pomp and Circumstance," giving the procession some semblance of marching music.

It was all part of Pi Day, a celebration that began at the Exploratorium in 1988 and has since spread around the world. The event is held on March 14 every year, because the numerical date, 3/14, represents the first three digits of pi (3.14).

The mathematical constant pi is the ratio of a circle's circumference to its diameter. It's an irrational number, meaning it cannot be represented by a fraction. And 3.14 is just the beginning; pi's decimal digits go on forever, and they never repeat.

Pi has fascinated mathematicians for millenia, and some of history's greatest thinkers have tried to calculate it. Greek mathematician and scientist Archimedes may have been the first to take a real crack at pi; in the third century B.C., he determined that it lay between 223/71 and 22/7 (3.141 and 3.143, roughly).

Later, the German-born mathematicianLudolph van Ceulen calculated pi out to 35 decimal places, and was so proud of the accomplishment that he had the numbers engraved on his tombstone.

These days, computers make it easier to nail down pi with greater precision. It's now known to more than 10 trillion decimal places, according to Exploratorium educator Ron Hipschman, who has helped organize Pi Day celebrations since the event's inception.

That knowledge, while impressive, may be overkill from a practical perspective. Just knowing pi to 39 decimal digits lets scientists calculate the width of the known universe with a precision equal to the diameter of a hydrogen atom, according to Hipschman.

"Thirty-nine digits is all you really need," he said during a Pi Day talk at the Exploratorium Wednesday.

Pi Day at the museum featured snack-size samples of savory pies, but people were drawn to the event by more than just free food. A love of numbers, and a lasting fascination with pi and its mystique, brought many to the hands-on museum despite a cold and rainy day. [Real Pie Chart: America's Favorite Pies]

Lindsay Yazzolino may have come the farthest. She travelled all the way from Boston to celebrate Pi Day at its source.

"I've been a pi enthusiast for quite some time," Yazzolino told LiveScience, explaining that she'd memorized the number to 1,000 digits while a senior in high school.

"There's no practical value to it," she said of her accomplishment. "A lot of it is just for fun."

Locals Chad and Robyn Barker attended with their 4-year-old son, which makes sense, since the boy's name is Pi.

"We like it from a more spiritual standpoint," Chad Barker told LiveScience. "It's a number that goes on forever, reflecting our infinite nature."

The procession of number-toting people — each of whom represented a digit of pi — wasn't wandering aimlessly through the museum. Led by wild-haired Pi Day founder Larry Shaw, a former Exploratorium physicist who retired five years ago, the procession wound its way to the Pi Shrine.

The Pi Shrine is a metal disk embedded in the floor of the museum. About the size of a saucer, the golden plate is engraved with the first 100 digits of pi. The march was designed to reach the shrine at precisely 1:59 p.m. local time. (In case you hadn't guessed, the first six digits of pi are 3.14159.)

When each clump of pi marchers reached the shrine, Shaw directed folks to walk around it 3.14 times. Swinging his ceremonial Pi Day pole, he also led them in a chorus of "Happy Birthday" to honor Albert Einstein, who was born on March 14, 1879.

With the Exploratorium getting set to move to a more tourist-friendly spot soon, Wednesday's festivities marked the last Pi Day at the museum's current location. So Shaw closed out the celebration by prying the Pi Shrine from the floor with a pie server, preparing the object for its impending move.

Pi Day started out as a staff-only party, Shaw told LiveScience. But it has morphed into a high-spirited attempt to engage people — especially kids — in math and science.

"Everybody learns best when they're excited and happy," he said. "That's basically where the museum as a whole is coming from."

Shaw demurred a bit when asked if he's proud that Pi Day has become such a phenomenon, with events held all over the world.

Editor's Note: This story has been updated to correct a statement about the music being played, which was Sir Edward Elgar's Pomp and Circumstance and not Beethoven's Ode to Joy.