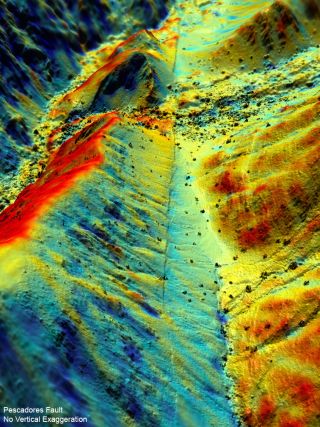 Geologists gain insights into how earthquake faults behave, thanks to a sophisticated tool called LiDAR which stands for "light detection and ranging."

Using LiDAR and data from a magnitude 7.2 event that struck near Mexicali, Mexico, in April 2010, researchers from the United States, Mexico and China developed the most comprehensive pictures ever taken of a fault zone before and after an earthquake.

"We can learn so much about how earthquakes work by studying fresh fault ruptures," study researcher Michael Oskin, a geologist at the University of California, Davis, said.

The team flew over the area with LiDAR equipment, which bounces a stream of laser pulses off the ground. New airborne LiDAR equipment can measure surface features to within a few inches. The researchers were able to make a detailed scan over about 140 square miles in less than three days. Among the areas mapped was Mexico's Pescadores Fault.

In the image above, post-earthquake topography shows the fault making a deep cut along a ridge — a cut that wouldn't have been "visible" without LiDAR.

Read more in 3-D Laser Map Shows Earthquake Zone Before and After.