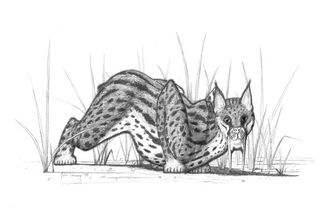 The saber-toothed cat just lost some of its swagger. Long considered a most fearsome predator among Ice Age giants, at least one species of saber-tooth bit more like a "pussycat," new research suggests.

About the size of a modern African lion, but much heftier, Smilodon fatalis has captured popular imagination for decades, most recently as "Diego" in the animated film "Ice Age." The cat is often referred to as the saber-toothed tiger, though scientists say this is misleading, as Smilodon and related species are more closely related to lions.

While there are several saber-toothed cats, this Smilodon species is the most well-preserved in the fossil record, showing the animal likely prowled across the grasslands of North America and parts of South America until about 9,000 or 10,000 years ago when saber-tooths became extinct.

For more than a century, scientists have debated how the cat used its knife-like teeth called sabers to take down formidable prey, such as bison, horses and perhaps even mammoths.

A new study, posted online today in the journal Proceedings of the National Academy of Sciences, finds the saber-tooth was more of a kitty cat, with a bite with just one-third the strength of a lion.

"For all its reputation, Smilodon had a wimpy bite," said study team member Stephen Wroe, a paleontologist at the University of New South Wales.

Wroe, lead author Colin McHenry of the University of Newcastle and colleagues used fossils to digitally reconstruct the skulls of a Smilodon and a lion (Panthera leo).

"We simulated the forces you might expect if each one was taking large prey," McHenry said. The "computerized crash tests" showed if the prey was still on its feet and struggling, the saber-tooth's skull didn't hold up to the associated forces, while the lion's skull did fine.

McHenry likens these forces to a person chomping down on a raging bull. "Imagine biting onto something like a bull at a rodeo while it's trying to buck you off," McHenry told LiveScience. "Imagine the forces that would go through your skull as it's trying to throw you off. The lion skull actually copes with those [forces] really well, but the saber-cat skull doesn't."

The results show the saber-toothed cat had a less-powerful bite compared with the lion, which the scientists suggest is partially due to Smilodon's relatively small lower jaw (a feature that makes space for the cat's lengthy sabers).

In order to avoid a butt-whipping but still come away with a meal, the giant cat must have had a different killing style than lions.

"Smilodon was an awesome beast, and what it lacked in bite force it more than made up for elsewhere," Wroe said.

They suggest Smilodon used its powerful forelimbs and oversized claws to take down a prey and restrain the animal before deploying its devastating canine teeth.

"The saber-cat had an immensely powerful body, perfect for wrestling large prey to the ground, and our models show that it needed to do this before trying a bite," McHenry explained. "Killing was more likely applied to the prey's throat, because it is easier to restrain the prey this way. Once the bite was done, the prey would have died almost instantly."

The result would be an ambush followed by a quick kill, the researchers say. In contrast, lions often hold a bite for many minutes to suffocate their large prey.

With such muscle mass for wrestling large prey, Smilodon was not so agile and therefore couldn't snag quick gazelle and antelope, for instance, as lions can. This limitation could be a reason the giant cats went extinct at the end of the last Ice Age.

"[Smilodon] sacrificed the ability to catch small prey, and when the large prey disappeared at the end of the last Ice Age, it went with them," McHenry said.