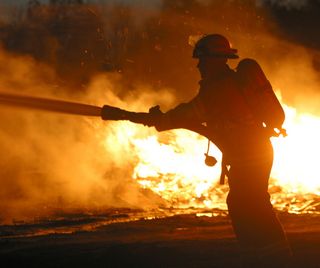 Twenty firefighters in the Midwest became infected with a gastrointestinal parasite after responding to a fire in a barn where 240 week-old calves were kept, according to a report today from the Centers for Disease Control and Prevention (CDC).

Investigators at the CDC determined that the firefighters, all men, were infected with an organism called Cryptosporidium parvum, a single-celled protozoan parasite, after fighting the blaze near the border of Michigan and Indiana last June.

The men reported symptoms such as diarrhea, abdominal cramps and fatigue, and it is likely that others who had no symptoms were also infected, the report said. For most, the illness subsided in a few days, but one man was hospitalized and had to have his gall bladder removed.

Direct contact with calves in the barn likely led to most of the infections. The firefighters had touched the animals, carrying or leading them out of the barn. Among the 20 sick men, only two did not report direct calf contact.

Cryptosporidium is not inactivated readily by alcohol-based hand sanitizers.