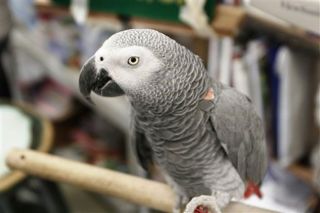 Alex, a parrot that could count to six, identify colors and even express frustration with repetitive scientific trials, has died after 30 years of helping researchers better understand the avian brain.
(Image: © Associated Press)

Alex the African grey parrot is dead, and all across the country anthropologists and psychologists are dressing in black.

Alex was best known to the public as the amazing talking parrot. Way beyond "Polly want a cracker," this bird knew more than 100 words and could hold a decent conversation.

Scientists in particular mourn his passing, not just because Alex was an excellent linguist, but also because he rattled our cage.

Over 70 years ago, researchers began trying to communicate with apes in some form of language such as broad hand signals, specially designed plastic symbols and keyboards. The idea was to discover the roots of human language, but the work proved more difficult than anyone expected. None of the apes has been more linguistically able than a 2-year-old child.

Nonetheless, for a long time, the chimp language people thought their animals were pretty special. But then came Alex.

In 1973, Irene Pepperberg bought Alex at a pet store. Armed with a Ph.D. in chemistry and enthusiasm for bird communication and bird minds, she started to train Alex to talk and converse at length.

Once the bird began to show off his skills, Pepperberg put him on TV, did print interviews and would talk to anybody, anywhere, about her amazing bird.

To her credit, Pepperberg didn’t stop with the popular press. She marshaled her case at academic meetings even though it was an uphill battle getting academics to listen.

Pepperberg, and Alex, had such a hard time within academe because they didn’t fit the accepted mold for either scientist or subject.

There was Pepperberg, a bubbly woman who never stopped talking about her parrot. The joke was there.

She was also up against a particularly difficult audience—the chimp people.

Chimp researchers are the kings and queens of primate research because their subjects share more DNA in common with humans than any other animal on earth. From that exhaled pantheon, a woman with a parrot simply couldn't play well.

Parrots have something to say about the evolution of human language? She must be joking.

But she wasn't. Bending to Pepperberg's persistence, anthropologists, psychologists and chimp researchers finally started to listen, and what they heard rocked their world.

Here was a bird that in many ways did better at language than chimps. What did that say about human evolution?

And if Alex was as good as an ape for modeling human evolution, then other animals might be worth looking at as well.

White-fronted bee-eater birds a better model of human families than monkeys or apes? Sure, why not? Elephants good models for understanding human sociality? Let's take a look.

Scientists owe a great debt to Alex, and we'd all like to say we're sorry for being such snobs for so long.