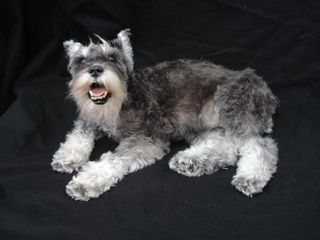 Mike McCullough never intended to start freeze-drying beloved pets for grieving owners. But more than a decade ago, a friend of a friend asked the Fort Loudon, Penn., taxidermist to save his beloved dog from the grave or cremation by preserving the animal instead. McCullough agreed.

Then he talked to a Wall Street Journal reporter about the process. It made the front page. Requests from bereaved owners started rolling in. Today, McCullough's taxidermy shop, Mac's Taxidermy, is one of a handful of places around the country that will preserve not only hunting trophies, but also the hunting dog.

"It's a whole different game for us," McCullough told LiveScience. "You have to be a counselor, you know what I mean? It's tough."

McCullough and other taxidermists like him use a special process to keep Fido or Fluffy looking lifelike even in death. Traditional taxidermy involves skinning an animal and stretching its hide over a three-dimensional mold. That won't cut it for the family pet, as the animal's features end up looking generic, nothing like the unique creature that owners knew and loved. [Quiz: Test Your Pet Knowledge]

Instead, pet preservationists use freeze-dry chambers, which lower air pressure to the point that ice turns directly into gas without going through the liquid phase. Many taxidermists use freeze-dryers to preserve small animals or fish. Taxidermist Cathy Huntley, owner of Freeze Dry By Cathy in Newaygo, Mich., first got her freeze-dryer to preserve flowers before branching into turkey heads and eventually pets.

The freeze-drying technique leaves animals looking much as they did in life, though the process isn't entirely noninvasive: Taxidermists must first remove internal organs and fat, which don't freeze-dry well. Artificial fillers then plump up the dehydrated animals. Even for closed-eye poses — the sort recommended by most taxidermists — false eyes must be inserted in the sockets to prevent a sunken look. For owners who want their pets to look awake, some taxidermists offer custom-made glass eyes, painted from photos of the pet during life.

The process costs hundreds of dollars for even the smallest animals, and thousands for a larger dog, such as a Golden retriever. In part, that's because it takes skill to prepare and pose an animal properly, Huntley told LiveScience. But freeze-drying machines themselves are incredibly expensive, running in the tens of thousands of dollars. The machines also require lots of electricity to run. At several hundred dollars a month in power bills, costs add up quickly. And freeze-drying isn't a fast process: It might take six months to prepare a 10-pound cat, said Anthony Eddy, owner of Anthony Eddy's Wildlife Studio in Slater, Mo. For an 80- or 90-pound dog, freeze-drying might take a year. [See Photos of Freeze-Dried Pets]

On top of the expense, freeze-drying requires effort and planning for owners. The pet must be frozen right after death and express-shipped to the preferred studio.

Even so, hundreds of pet owners each year make the effort. Eddy alone says his business preserves between 150 and 200 pets per year. Their owners hail from Florida, California, Hawaii and every state in between. What they all have in common are deep grief and a sense of unbreakable attachment to their animal companions.

"What we hear from pet owners is that they're so attached to their pet, they just can't stand to bury their pet or they don't want to cremate it," Eddy told LiveScience. "It's just too precious to them."

Many clients are older or single, living alone, McCullough said. Some preserve their pet so that when they themselves die, the animal can be buried with them.

"I actually had a lady send me a picture," McCullough said. He'd preserved her grandfather's dog, and now the woman's grandfather had passed away. "There's this picture of this grandfather and this dog actually in the same casket."

In recent years, McCullough said, he's seen a trend of younger people opting for freeze-dry preservation, including one couple from Las Vegas, clients of his, who sent him photos of their preserved beagle in a doggie stroller.

While pet preservation is "not for everybody," Eddy said, those who it is for often write him with deep appreciation. In fact, bonds between pets and pet owners are often quite strong, according to Allen McConnell, a psychologist at Miami University in Ohio who studies the pet-human bond.

"One thing that our research has shown is that when people feel closer to their pets, they derive stronger benefits in terms of mental or physical health," McConnell told LiveScience.

Among these benefits are greater self-esteem, less depression and lower blood pressure, he said. A preliminary study McConnell and his colleagues are just completing followed potential pet adopters after they visited an adoption event. Those who actually went through with the adoption had lower depression levels two months later than those who walked away without a furry friend.

The type of pet doesn't seem to matter, McConnell said, perhaps explaining why pet preservers get clients with everything from cats to dogs to birds to lizards. What matters is the extent to which the person feels a bond and projects humanlike emotions onto their pet. [America's Favorite Pets]

Thoughts of pets can also soothe loneliness just as well as thoughts of a best friend, McConnell's lab has found. These strong bonds may help explain why some people don't want to let go after death.

Eddy, McCullough and Huntley are all pet owners themselves, though none said they'd opt for preservation of their own animals.

"It'd kill me to come in and look at her every day," McCullough said of his own pet bulldog.

But all three taxidermists said they understood what drives their clients. Like McCullough, Huntley never expected to start preserving pets. Then she thought of the work she does for hunters.

"I thought, well, you know, if someone thinks enough of a critter that they worked really hard to track and shoot … if they think enough of that animal to put it up on their wall, then somebody who has lived with a pet that they love dearly and have for 15 years, why not?" Huntley said.