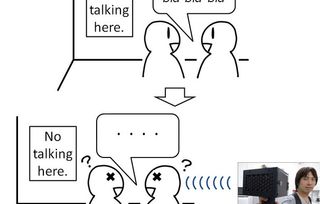 Some people never know when to shut up during meetings, movies or while yammering away on the phone at public libraries. Now Japanese scientists have come up with a portable speech-jamming gun that forces obnoxious talkers to come to a stuttering halt.

The "SpeechJammer" device uses a direction-sensitive microphone and speaker to silence talkers with their own words — a psychological trick that creates a delay between the time talkers speak and the time when they hear the words coming out of their mouths. The hearing delay trips up the brain's thinking processes and causes the person to stutter.

It's like hacking people's minds, rather than using a cell phone jammer to disable talkers' mobile gadgets.

Such a clever gadget could impose a blessed silence in public spaces and at meetings, so that even the quietest people can take turns having their say or simply enjoy the lack of noise. The breakthrough was first reported by Technology Review, which threw in its own suggestion for installing the device at the United Nations.

A preliminary study showed that the speech jammer could easily shut up people doing a "reading news aloud" task, but had less success in silencing someone who was speaking a "spontaneous monologue." That's good news for people who hate long, boring prepared speeches, but perhaps less comforting for anyone who wants to shut up spontaneous talkers.

The Japanese researchers — Kazutaka Kurihara at the National Institute of Advanced Industrial Science and Technology in Tskuba and Koji Tsukada at Ochanomizu University — see their invention as a conflict-resolution system that promotes peaceful dialogue.

But like any technology, there are obvious ways to abuse the speech jammer. Troublemakers could potentially use it to disrupt public speeches or at political rallies, making speakers stutter as painfully as Colin Firth during 2011's Oscar-winning film "The King's Speech."

On the bright side, the speech jammer fails to shut down meaningless sound sequences uttered by people. That allows anyone who has had enough of enforced silence or garbled talking to run away screaming "Aaaaaaaaaah!"