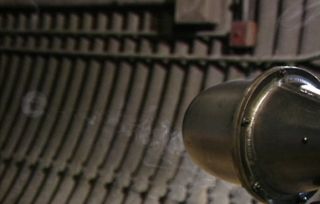 The ring of gas is fired by a vortex gun as seen in this in-house Batelle video.
(Image: © Batelle)

Vortex guns capable of firing doughnut-shaped rings of air have sat around as toys or oddball gadgets for years. Now a U.S. lab has added an extra kick with electrically charged rings that could clear out smoke-filled hallways for firefighters, or deliver clingy shots of tear gas or pepper spray without the need for accuracy.

The vortex gun fires rings that reach a high speed of 90 mph upon exiting the muzzle and travel at 60 mph over more than 150 feet. The rings revolve as they fly through the air, but remain calm within the interior — not unlike the eye of a hurricane — so that they can hold a cargo of nonlethal gas or electrically charged air right up until hitting a target.

Having both a positive and negative charge can make tiny smoke particles clump up, fall out of the air like rain droplets and cling to surfaces, said Jim Dvorsky, product development leader at Battelle. Such a tactic could prove far better at clearing smoke from burning buildings than today's "crude" methods of using exhaust fans.

Eventually, vortex guns could join the firefighters' arsenal alongside futuristic devices such as electric fire-snuffing wands made by the U.S. military's DARPA research arm.

Similarly, an electrically charged vortex gun could add extra clinginess to tear gas or pepper spray particles. The ring won't hold together as well because of the electric charge, but that "leakiness" can become a selling point for hitting targets that don't require the best accuracy.

"The ring will disperse as a result of the charge, but in our case that's actually a good thing," Dvorsky explained. "It allows us to disperse pepper spray and have it attach to skin or clothing."

The Columbus, Ohio-based Battelle recently filed for a patent on the electrically charged vortex gun application. Dvorksy is working with colleague Lynn Faulkner, a Battelle program manager, to balance the electric charge so that the vortex rings might hold together for longer distances.