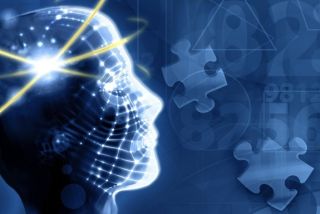 Overeating has been linked to a litany of health problems—diabetes, high blood pressure and stroke, to name a few. Memory loss, dementia and even Alzheimer's may someday be added to that list, according to the preliminary findings of a study on aging conducted by the Mayo Clinic.

Mayo researchers caution against reading too much into their work thus far correlating caloric intake in the elderly with the onset of mild cognitive impairment (MCI)—the stage between normal age-related memory loss and early Alzheimer's disease. Still, a report they plan to present in April at the American Academy of Neurology's 64th Annual Meeting in New Orleans indicates that overeating may greatly increase the risk of memory loss for elderly people.

In 2006 the Mayo Clinic chose a random sample of 1,233 people in Olmsted County, Minn., ages 70 to 89 years old (none previously diagnosed with dementia) and asked them to fill out a questionnaire describing their diets over the previous year. Participants then returned the surveys to the clinic in Rochester, Minn., after which the researchers grouped the study participants into three categories: those whose daily caloric consumption was between 600 and 1,526 calories; between 1,526 and 2,143; and between 2,143 and 6,000. Each participant then underwent a series of MRI brain scans and cognitive tests.

Correlating caloric consumption with test performance, researchers concluded the odds of having MCI more than doubled for those in the highest calorie-consuming group compared with those in the lowest calorie group. There are several caveats to these findings, however. For instance, the report did not take into account the types of food and beverages consumed nor did it examine the rate at which food was eaten throughout a day.

Study author Yonas Geda acknowledges that the research to better understand the link between MCI and eating in the elderly is still preliminary, but he notes that it does create a foundation for more extensive cause-and-effect research, which he and his colleagues are currently pursuing.

Scientific American spoke with Geda, an associate professor of neurology and psychiatry at the Mayo Clinic in Scottsdale, Ariz., and co-chair of the clinic's Neuroscience Discipline Oriented Group, about his team's efforts to identify the causes of memory loss in the elderly and what they plan to investigate in their ongoing research.

[An edited transcript of the interview follows.]

What is mild cognitive impairment? With MCI, the person is not demented. The person is functioning well, but when you test them on certain memory tests they do poorly as compared to their age-, education- and sex-matched peers. We observed that a daily caloric intake in excess of 2,143 was associated with a significant chance of having MCI. If I am consuming more than 2,143 calories per day, my odds of having MCI is twice that of somebody that consumes 1,526 calories per day.

How did researchers test for MCI? We determined whether participants had MCI based on three hours of testing when participants came to the Mayo Clinic to turn in their questionnaires. This included testing of memory, language and also sense of direction.

How was memory tested? Participants were asked to memorize 15 different words and then asked over timed intervals to remember as many words as they could. A normal person might remember seven out of 15 words the first time they are asked, then maybe 10 words the second time and 13 words the next time. After a half hour the person might remember 12 out of 15. With Alzheimer's patients, if give them 15 words to remember, they'll remember two initially. After a half hour, they won't remember any.

What questions did you and your colleagues ask yourselves as you analyzed the information from the questionnaires, the brain scans and the cognitive tests? Basically, what is the mechanism of action? How does increased caloric intake lead to cognitive impairment? We don't know this, but there are other researchers who have done work in this area. Mark Mattson at the Laboratory of Neurosciences, National Institute on Aging Gerontology Research Center in Baltimore in 2000 published a study with a very catchy title, "Take Away My Food and Let Me Run," indicating that excessive caloric intake may lead to oxidative stress within the cell and that may lead to damage. On the other hand, based on animal studies, a 30 percent caloric restriction seems to stimulate neuroprotective factors that can increase the resistance of neurons in the brain to dysfunction and death.

What other research has influenced your study? I became curious when I read in 2009 that caloric restriction in monkeys was associated with less mortality and improved cognitive function. That study was done by investigators at the Wisconsin National Primate Research Center. There were many other similar studies before 2009 involving monkeys, rodents and worms as well. Our research is also consistent with a group of Australian National University researchers conducting The Personality and Total Health (PATH) Through Life Project. [In a paper published in September 2011 in the American Journal of Geriatric Psychiatry, the PATH researchers found that excessive caloric intake and high intake of monounsaturated fats was predictive of mild cognitive impairment.]

What do you have planned for future study of caloric intake and memory loss? In this particular study we did not adjust for physical exercise. I think we are going to do that as well as look at the macronutrients, such as carbohydrates and proteins, to see which ones might be of concern. This time we considered how much participants ate but did not take into account what they ate.

Why didn't you include data about what patients ate in addition to how much they ate? We have data about what they ate, but for this analysis I only looked at the total calories. This was the first thing we wanted to see. Once you get the signal, you keep probing. There are many more dimensions we will get from the questionnaire data.

People should be very, very careful not to overstretch our findings at this point. Certainly people should not look at those three categories and say, 'Well, if I consume less than 1,500 calories, then I will not have MCI.' That would be the wrong conclusion. Instead, they should combine all that they know about diet from their doctors and add to that the issue of consuming too many calories. In addition to being bad for your heart, it might be bad for your brain as well. People should consider everything they know about healthy lifestyle and add this into the mix as well. Certainly we are not recommending starvation or malnutrition.