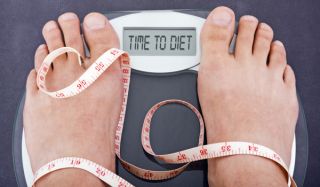 VANCOUVER — Weight loss is not as simple as eating less and exercising more, and for those who struggle to shed the pounds, a new equation may offer some help.

Scientists are now using mathematics to better understand the physiology of weight loss, and more accurately predict just how much weight someone will lose on a specific diet and exercise regime, researchers said here today at the American Association for the Advancement of Science's annual meeting.

In the past, physicians assumed that eating 500 fewer calories per day would lead to about a pound of weight loss per week, said Kevin Hall, a researcher at the National Institutes of Health in Bethesda, Md.

But it turns out, this rule of thumb is wrong, Hall said, because it doesn't take into account that metabolism slows down during dieting. Thus, predictions that used this rule were overly optimistic, Hall said.

Hall and colleagues have developed a model that takes into account an individual's age, height, weight and physical activity level to better predict how much weight they might lose on a diet and exercise plan. Currently, the model is intended only for use by physicians and researchers scientists, Hall said.

Hall's research has also come up with a more realistic rule of thumb for weight loss. The new rule says you need to cut 10 calories per day from your diet for every pound you want to lose over a three-year period. So cutting 100 calories per day will lead to a 10-pound weight loss over three years, Hall said. Half of this weight loss would occur over the first year. To lose more weight after the three-year period, you'd have to cut more calories, Hall said.

The model may help policy makers understand the impact of public health measures on the obesity epidemic. For instance, one estimate of the effect of a 20 percent tax on sugar-sweetened beverages predicted that such a tax would lead to a 50 percent reduction in the number of overweight people in the United States in a five-year period. Hall 's new equation predicts about a 5 percent reduction in the percentage of overweight people in five years, Hall said.

Pass it on: New math models may be able to more accurately predict how much weight people will lose if they follow a specific diet and exercise regimen.