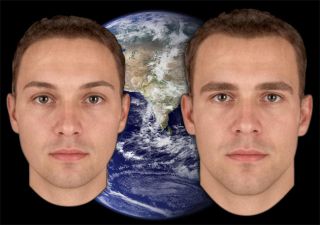 New research shows that the tone of a man's skin is more important to a woman than how masculine his face looks.
(Image: © Lisa DeBruine)

In the game of love and sex, beautiful skin may draw the line between winners and losers: Women find men with a healthy skin color more appealing than those with a masculine face, new research shows.

Previous studies have suggested that heterosexual women find men with manly faces — that is, those with prominent cheek bones, heavy brows and a relatively long lower face with a defined jaw line — most attractive, particularly during ovulation. Researchers have proposed that women instinctually choose men with masculine features because those traits are an indication of good health, which would then be passed on to their children.

However, Ian Stephen, a psychologist with the University of Nottingham in Malaysia, previously found that "golden" skin is also a natural indication of good health, and that people tend to find those with this complexion attractive. So which would women prefer: a guy with golden skin or a macho mug?

To find out, Stephen and his colleagues took photographs of 34 white and 41 black men's faces. They then measured the color of the faces and used a computer program to rate the masculinity of the faces.

"We used this [computer] technique to mathematically compare the shape of the men's faces to a similar sample of women's faces from the same populations," Stephen said in statement.

The researchers showed the photos to 32 white and 30 black women, who then rated how attractive they thought the men were.

However, though the golden color was very important for women rating faces of their own ethnic group, they didn't seem to care as much about that trait in men of other ethnicities. The researchers suggest the women were unable to detect the relatively subtle skin color differences in men of other races.

The golden hues in our skin likely come from the carotenoid pigments of the fruits and vegetables in our diet, Stephen explained, adding that those plant pigments are thought to promote health and fertility.

"Our study shows that being healthy may be the best way for men to look attractive," he said. "We know that you can achieve a more healthy-looking skin color by eating more fruit and vegetables, so that would be a good start."

The study was published in the January edition of the journal Evolution and Human Behavior.