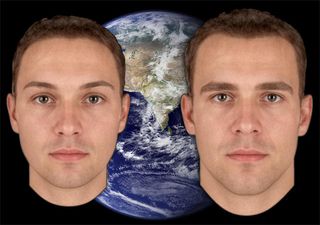 In a new study, participants looked at 20 pairs of male faces, with each pair consisting of masculinized and feminized versions of the same face. More masculine faces (right) had larger jaws, for instance, than the more feminine of the pair (left).
(Image: © Lisa DeBruine.)

Masculine facial traits, such as larger jaws and heavier brows, have been linked with men's health and thus perhaps healthier offspring.

Still, women do not show consistently strong preferences for men with such traits, which hints that women who do choose masculine-looking partners might incur substantial costs, such as running the risk their manly mate will run off with other women. Indeed, past research suggests women perceive masculine men as dishonest, uncooperative, more interested in short-term flings over long-term relationships, and even as bad parents.

Scientists conjectured that in environments where health was a bigger concern, women might choose more masculine men, unconsciously making a mental trade-off between the potential costs and benefits of greater masculinity.

To investigate this idea, scientists compared health data across 30 countries, based on World Health Organization statistics. They also looked at masculinity preferences of more than 4,500 heterosexual women, ages 16 to 40, from those countries. Each study participant looked at 20 pairs of male faces over the Internet, with each pair consisting of masculinized and feminized versions of the same face — for instance, more masculine faces had larger jaws. The volunteers were then asked to choose which face they found more attractive for each pair.

"Women from countries with poorer health — for example, high mortality and increased incidence of communicable disease — did prefer masculine men more," said researcher Lisa DeBruine, a psychologist at University of Aberdeen in Scotland.

The effect the researchers saw was slightly weaker when it came to links between nations with good health and the masculinity preferences of women there. The five healthiest countries they looked at were: Iceland, Sweden, Italy, Switzerland and Spain, while the five nations where women showed the weakest preferences for masculinity were: Sweden, Belgium (tied with Denmark and the Netherlands as the twelfth healthiest nation they looked at), Romania (the sixth least healthy country), Denmark and New Zealand (the thirteenth most healthy).

The fact that women in nations with good health did not always prefer less masculine men could reflect how other environmental factors affect mate preferences.

"For example, women's equality and control of resources may also affect what type of male partner they prefer," DeBruine said. "Additionally, we would like to extend our research to look at countries with a greater range of health, since we were not able to include countries with very poor national health in our current research, because these countries tend to have poor Internet access."

DeBruine noted these new findings complement past research of hers showing that individual differences in the extent to which women are disgusted by cues of disease, such as sitting next to someone with open sores, predicted their preferences for male facial masculinity.

"Women who were more easily disgusted — which indicates how concerned they are about health — also preferred masculinity more," she said.

Past research has also suggested the mating systems people develop might be related to health. For instance, scientists found that disease-rich areas were more likely to have polygynous, rather than monogamous, mating systems.

DeBruine and her colleagues detailed their findings online March 17 in the journal Proceedings of the Royal Society B.