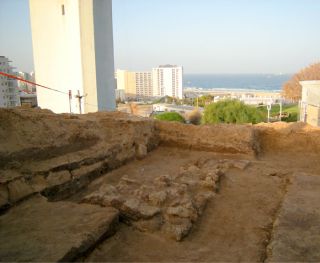 Above, the excavation on top of the Hill of Jonah where the prophet, who was swallowed by a whale or fish, is believed by some to have been buried. It uncovered thick stone walls, in the center, believed to belong to a fortress occupied at around the time of the prophet, roughly 3,000 years ago.
(Image: © Sa'ar Ganor, courtesy of the Israel Antiquities Authority)

Remains of thick stone walls uncovered recently atop a hill in Israel — where tradition says the prophet Jonah was buried — indicate the site was occupied during the time of the prophet, almost 3,000 years ago.

The Israeli Antiquities Authority announced the discovery, on Giv'at Yonah (the Hill of Jonah) above the modern city Ashdod, today (Feb. 6).

Jewish, Christian and Muslim scriptures tell of the prophet Jonah, who at first fled God's instructions to preach against wickedness in Nineveh, an ancient city in Iraq. After spending three days and three nights inside the belly of a fish or whale Jonah was forgiven by God and released. According to the story, he then went to Nineveh and persuaded the inhabitants to repent.

According to some traditions, including Muslim lore, Jonah was buried on Giv'at Yonah.

This new discovery does not provide any archaeological evidence of Jonah's tomb. However, it, along with other evidence unearthed atop the hill, show Giv'at Yonah was occupied during the time of Jonah, the late seventh and early eighth centuries B.C., according to Sa'ar Ganor, an archaeologist with the Israel Antiquities Authority.

The excavation also uncovered pottery shards, which could be easily dated. These allowed researchers to reasonably estimate an age for the walls, which measure more than 3.3 feet (1 meter) wide and were built using rocks from the beach below, Ganor told LiveScience.

In the 1960s, an excavation carried out nearby before the construction of a lighthouse, uncovered similar remnants of walls as well as an "ostracon" — a piece of pottery bearing an inscription — indicating that someone named Ba'altzad gave money as a present to a holy place.

Excavators believe the newly uncovered walls belonged to a strategically located fortress. The hill stands 164 feet (50 meters) above sea level, and overlooks the Mediterranean Sea and other nearby settlements. It is also the location of a modern lighthouse, Ganor said.

It is possible the fortress was inhabited by the Assyrians who ruled the region during that time, or that it was occupied by Josiah, king of Judah, who conquered the territory from the Assyrians and controlled the area in seventh century B.C., according to the Israeli Antiquities Authority.