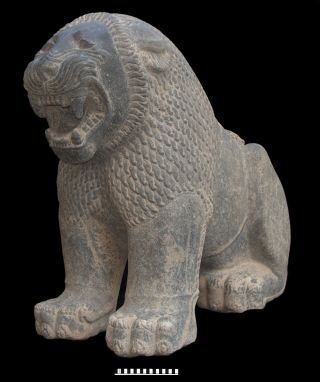 The stone lion sculpture that adorned the Tayinat citadel gate was uncovered in southeastern Turkey by University of Toronto archaeologists.
(Image: © Jennifer Jackson)

The discovery of a 3,000-year-old stone lion guarding a gate complex in southeastern Turkey suggests the people of the Neo-Hittite Kingdom of Patina were more culturally advanced than previously believed.

The gate appears to have provided access to the citadel of Kunulua, the capital of Patina, between 950 B.C. and 725 B.C. (The site is also sometimes called Kinaula, and the city-state Palistin.)

The lion, which is about 4 feet (1.3 meters) tall and 5 feet (1.6 m) wide, is "fully intact," study researcher Timothy Harrison, of the University of Toronto in Canada, said in a statement. "It is poised in a seated position, with ears back, claws extended and roaring."

"A second piece found nearby depicts a human figure flanked by lions, which is an iconic Near Eastern cultural motif known as the Master and Animals. It symbolizes the imposition of civilized order over the chaotic forces of the natural world," Harrison said.

During this time, the eastern Mediterranean was just emerging from the Bronze Age and entering the Iron Age. These animal statues "continued a Bronze Age Hittite tradition that accentuated their symbolic role as boundary zones, and the role of the king as the divinely appointed guardian, or gatekeeper, of the community," Harrison said.

The site indicates that some of the cultural traditions of the Bronze Age carried over, even as the Assyrians took control of the city. The gate seems to have been destroyed in 738 B.C. when the area was paved over and converted into the central courtyard of a sacred Assyrian precinct.

The dig is part of the Tayinat Archeological Project in southeastern Turkey. A very similar lion-carved column was discovered in the 1930s at the entrance to an Assyrian temple on the same site. It's possible that the Assyrians reused lion statues from elsewhere on the site. Either way, this new evidence indicates that the statues weren't a product of the Assyrian culture, as researchers had thought, but existed in the area before occupation.

The finding has yet to be published, and the researchers are continuing to excavate the site.