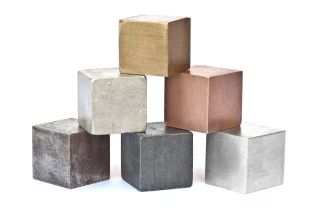 We're not quite Iron Man, but metals are intricately entwined with our bodies. They make vital functions like respiration, circulation and reproduction possible.

Cobalt, for instance, found at the core of vitamin B12, is key to making red blood cells, while iron allows those cells to ferry oxygen and other important chemicals to the body's tissues. Calcium not only strengthens bones but also plays a role in muscle, nerve function and blood clotting. Sodium and potassium help the heart and nerves communicate through electrical signals.

As the mercury-tainted Mad Hatter and headlines about lead poisoning attest, exposure to too much metal can be harmful. But not getting enough metal in the right places can make us sick, too. This is the case with conditions such as iron-deficiency anemia and osteoporosis. Read on to find out about National Institutes of Health-funded research into two metals that affect our health in unexpected ways.

Small amounts of zinc help ensure a proper immune response and healthy nervous system. Zinc also regulates the function of some genes, enables many proteins to carry out their vital roles and helps speed the chemical reactions that keep us alive. On the flip side, an imbalance of zinc has been linked to Alzheimer's disease, diabetes, prostate cancer and seizures.

Chemist Stephen Lippard of the Massachusetts Institute of Technology, who previously developed fluorescent chemical sensors that detect tiny amounts of zinc in the body, discovered with colleagues that zinc helps regulate communication between two types of brain cells in the hippocampus, the brain's center of learning and memory. Their findings suggest that zinc affects how we form memories and that high concentrations may contribute to epilepsy, where abnormal cell communication causes seizures. Scientists had seen zinc in specific hippocampal cells before but weren't sure what it did there.

Our bodies take great care to make sure metals go only where they need to and in exactly the right amount. Like teachers keeping an eye on students at the prom, so-called "chaperone" proteins protect metals (and the cell) from unwanted interactions while they safely deliver them to their cellular destinations. Problems can arise if chaperones don't do their jobs properly.

Take copper as an example. Malfunctioning chaperones that starve proteins of copper can lead to weak limbs, bone growths, seizures and kinky, brittle hair. That's what happens in people with Menkes syndrome. Copper that gets shut out of cells can accumulate in the bloodstream and cause a different disorder, Wilson's disease. High levels of copper can cause liver damage, kidney failure, coma and death. A copper chaperone that also ferries platinum can affect how cancer patients respond to cisplatin, a platinum-containing substance used in drugs to treat advanced testicular and ovarian cancers.

One way researchers are studying these copper-related disorders is by looking at the three-dimensional shapes of the chaperones. For instance, researchers at Northwestern University deciphered the intricate structure of a chaperone that inserts a molecule of copper into an enzyme whose defective forms have been linked to some inherited types of amyotrophic lateral sclerosis, also known as Lou Gehrig's disease. This structural knowledge, which offers insight into how the chaperone works and interacts with other molecules, deepens scientists' understanding of the disease and could provide a potential new treatment target.