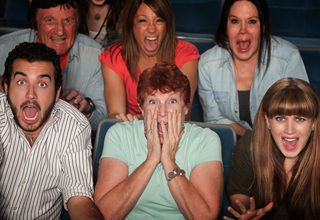 People often overestimate their willingness to face future or hypothetical embarrassment. Researchers say they have found a way to reduce this gap.
(Image: © CREATISTA | shutterstock)

Why is it easier to commit to giving a speech or asking a crush on a date or performing before a group when your audience isn't already waiting?

That's because people experience an "illusion of courage" when predicting how they'll behave in a distant but embarrassing situation, according to a team of researchers who assessed the gap between prediction and actual behavior and tested ways to reduce it.

They found that scary or anger-provoking movie clips reduced the proportion of students who said they'd tell a class a funny story or dance for three minutes to James Brown's "Get Up (I Feel Like Being) a Sex Machine".

In the first of a series of experiments, the team looked to see how viewing a frightening clip from the movie "The Shining" affected undergraduates' willingness to perform a funny story before an audience — safely five days in the future. Fewer of those who saw clip said they would perform, compared with students who did not see it. And, when the date arrived, most of those who had not seen the clip backed out.

A second experiment found both the scary clip and an anger-provoking clip from the movie "Cry Freedom" reduced the number of students who said, hypothetically, they would accept an offer to dance to James Brown's tune for $2, before an audience. These students also asked for more money to perform than did students who didn't see the clips.

Researchers also looked at the effect of aerobic exercise by polling people before or after they exercised about their willingness to dance to "Shake Your Booty" before an audience — aerobic exercise has been shown to temporarily reduce anxiety and increase confidence. They found people leaving the gym were more willing to say yes.

It's unlikely bad moods prompted by viewing the clips were responsible, according to the researchers, a team from the University of Colorado at Boulder, Carnegie Mellon University and Cornell University. In a fourth experiment, they found that viewing "The Shining" clip had no effect on students' willingness to do an "onerous" task, namely, transcribing interviews.

The results suggest that experiencing even relatively mild negative emotions can elicit more accurate predictions from people about their behavior in embarrassing situations.

The gap between how someone predicts they'll behave and how they actually behave isn't unique to social anxiety-provoking situations. The same dynamic has been demonstrated in a variety of scenarios. For instance, the researchers said, other studies have shown that people who are not in pain are more willing to expose themselves to pain in the future; people who have just eaten are less likely to choose to eat a high-calorie snack in the future or be prone to eat a plate of spaghetti for breakfast; smokers who are not currently craving a cigarette underestimate their future impatience for a puff, compared with smokers currently in craving's thrall.