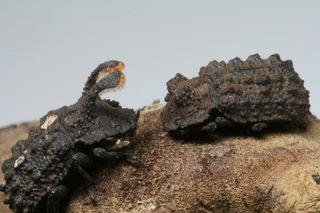 Like wallflowers at the dance, beetles that spend most of their time with a small group of other males have less mating success.
(Image: © Journal of Evolutionary Biology (January 2012))

Among a type of beetle, antisocial males get less female action than their better-networked friends. Since the popular males are the better breeders, this sociability seems to be a naturally selected trait, but the researchers studying the forked fungus beetles in a Virginia forest want to know whether it's passed down through the generations.

Uncovering how social networks operate, even among tiny, bark-textured beetles, is vital if we want to understand how all societies evolve, study researcher Vince Formica of the University of Virginia explained in a statement. "Do individual behaviors cause their position to evolve, and does it cause the society to evolve as well? That's what we're attempting to answer."

After the researchers spent 19 straight nights in the forest observing the insects' behavior, Formica said, "Forked fungus beetles are not pretty — they look like tree bark — but they're helping us better understand the evolution of social behavior."

The researchers monitored a natural population of the forked fungus beetle, Bolitotherus cornutus, in a southwest Virginia forest near the university's Mountain Lake Biological Station. They tagged individual beetles with identification marks that glow under UV light, to keep track of them, and checked in on their interactions four or five times a night. [Crazy Beautiful: Gallery of Treehopper Helmet Designs]

The group studied one population of beetles that had taken up residence on a rotting log with a large amount of the beetles' favorite fungus, artists' bracket fungus, growing on it. (The beetles nibble the fungus and lay their eggs in it.) "We can sit and watch their whole universe," Formica said, but to follow the beetles' social lives, the researchers had to watch the forest floor overnight."We drink a lot of espresso," Formica said.

The researchers counted the beetles' interactions with each other and how many times the beetles were seen mating. Like wallflowers at the dance, beetles that spent most of their time with only a small group of other males ended up spending less time with females and had less mating success than the beetles that interacted with larger groups.

"It's clear in this study that being central in a large social network is key to high reproductive success," Formica said. "If a trait — such as an individual's position in a network — is related to reproductive success, you can say it is experiencing natural selection and has the potential to evolve."

Some of the traits that could help a male beetle be more social are individual behaviors, such as how active he is. Other traits that may be involved, such as being more cliquish or more aggressive, may be passed down and inherited.

"We've shown that the trait of sociability is under natural selection, but we don't know yet if it's heritable," Formica said. "This is one of only a few studies that has shown that position in a social network is a trait that can experience natural selection and therefore has the potential to evolve." [Mind Control: Gallery of Zombie Ants]

Though the cliquey males mated less, researchers don't know how successful these matings were at fertilizing the female's eggs. Another factor to consider is the odd phenomenon of "female cryptic choice," in which the females of some species can determine the paternity of their offspring by choosing whose sperm to use.

These factors could skew the actual number of offspring any given male has, the researchers said. Their study was published in the January issue of the Journal of Evolutionary Biology.