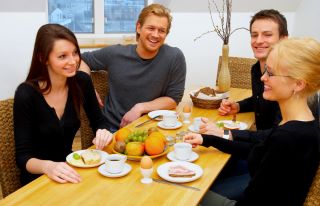 The couple on the sitcom "King of Queens" may be onto something with their unending pursuit of another couple to hang out with. New research suggests having a couple to double date with can improve the happiness of your own relationship.

The researchers conclude that healthy couple friendships make a marriage more fulfilling and exciting for several reasons: By increasing partners’ attraction to each other, providing a greater understanding of the opposite sex, and allowing partners to observe ways that other couples interact and negotiate differences.

"With a great couple friendship, you get to see your partner at her/his best," study researcher Geoffrey Greif, of the University of Maryland, told LiveScience in an email. "He/she is having fun, interacting in a loving and supportive way with another couple as well as with the partner."

The research was published as part of the book "Two Plus Two: Couples and Their Couple Friendships" (Routledge, 2012) by Greif and Kathleen Holtz Deal, also of the University of Maryland.

The researchers interviewed 123 couples, 122 individuals in relationships, but who were questioned alone and 58 divorced individuals. On average, couples had about five "couple friends" they spent time with. When asked how important these friendships were, 40 percent of respondents said they were "very important" and 39 percent said "somewhat important."

When couples indicated they agreed on how to divvy up their time between others and themselves, they were more likely to also say they had a happy marriage or relationship, the researchers found.

For different people, these "couple" relationships had different meanings. "Couples are looking for different things in their couple friendships — we found there are 'fun-sharing' and 'emotion-sharing' couples," Greif wrote.

"Emotion-sharing" couples open up about their emotions and troubles with their couple friends, though the researchers found that the topics of sex and money are often still taboo. "Fun-sharing" couples spend their time together having fun and getting away from the stress of everyday lives.

Many couple friendships seemed to start out as a one-partner friendship that blossomed into a foursome. For some, though, finding couple friends was e difficult, with lives busy with work and family.

"Sometimes couples go to Craigslist— our sampling of Craigslist websites in different cities did turn up groups like book clubs for couples, environmental groups, hikers, cooking, wine clubs, etc.," Greif said. "At the same time, we quote a couple at the beginning of the first chapter who advertised for friends in a small town and got responses from couples that wanted to swing. They removed their ad."

Though couple friendships seem to be gaining importance, they are also harder to find and keep, especially as families grow.

"Couple friendships, as reflected in early TV shows like 'The Honeymooners', used to be a more prominent part of family life. With women moving increasingly into the workforce, both partners are now weighing their time with others as well as time alone with each other," Greif said.