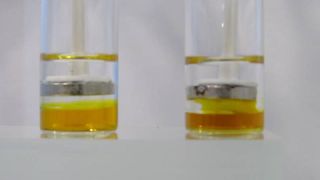 Introducing a magnet forces the magnetic soap (on bottom of test tube) to rise up through an less-dense organic compound.
(Image: © Institut Laue-Langevin)

Most of us think of soap as a way to make stuff less sticky. But a new process actually ups the stickiness of soap itself — by making it magnetic.

Researchers at Bristol University in the United Kingdom have created the world's first magnetic soap, made by dissolving iron-rich salts in water. The goal is to create a soap that can be used in industrial cleaners or in environmental cleanups that can then be picked up out of the environment, not just rinsed away.

If the soap works, it could be used in situations like the 2010 Deepwater Horizon oil spill in the Gulf of Mexico. To clean up that spill, the energy company BP sprayed hundreds of thousands of gallons of dispersants at the site. These dispersants could potentially harm the environment themselves, so a surfactant (as soaps are known in the industry) that could break up oil and then be picked up itself would be a breakthrough.

"Though these exact liquids aren't yet ready to appear in any household product, by proving that magnetic soaps can be developed, future work can reproduce the same phenomenon in more commercially viable liquids for a range of applications from water treatment to industrial cleaning products," study researcher Julian Eastoe, a professor of chemistry at the University of Brisol, said in a statement.

To create a magnetic soap, researchers dissolved iron into surfactant materials made of chloride and bromide ions (charged particles), very similar to those found in some household cleaners. The result was a soap made up of cleansing material surrounding tiny iron nuclei.

These magnetic "scrubbing bubbles" were then tested in a tube with a less-dense organic solution, which floated over the soap. When the researchers introduced a magnet above the test tube, the iron-rich soap overcame both gravity and the surface tension between the water and oil, bubbling up through the organic solution toward the magnet.

Experiments at the Institut Laue-Langevin in France revealed that the soap's magnetic properties come from the surfactant's tendency to form clumps of tiny particles called micelles in water.

The ability to control the soap with magnets could come in handy for routine uses of industrial soap, according to the Institut Laue-Langevin.

"Any systems which act only when responding to an outside stimulus … is a major breakthrough, as you can create products which only work when they are needed to," Peter Dowding, an industrial chemist not involved in the study, said in a statement. "Also, the ability to remove the surfactant after it has been added widens the potential applications to environmentally sensitive areas like oil spill cleanups."