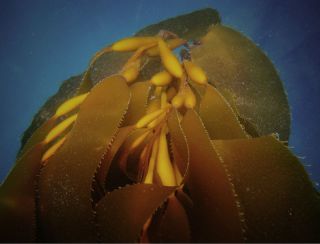 Brown seaweed, also called kelp, hold sugars that can be made into biofuels. A new system allows microbes to convert a previously inaccessible form of sugar in leaves like these.
(Image: © Courtesy of Bio Architecture Lab, Inc.)

A promising new system can convert brown seaweed into biofuel, opening up a new possible source of energy that could help replace fossil fuels, like gasoline, scientists reported today (Jan. 19).

The secret: bacteria genetically engineered to break down a previously inaccessible sugar in seaweed, called alginate.

The researchers who developed this new system used it to generate ethanol, a biofuel that is added to gasoline; however, it has the potential to produce not just ethanol but other biofuels, they and others say.

The new system is like a Lego platform, said Yasuo Yoshikuni, a study researcher and chief science officer and co-founder at Bio Architecture Lab in California. With changes to the components in the process, the same microbe-based system could be used to produce a variety of products, Yoshikuni said.

For instance, the system could be used to turn seaweed into a source (also called a feedstock) for other biofuels, which could include butanol — an alcohol, like ethanol, that is blended into gas — or chemicals used in biodiesel, which has properties similar to conventional, petroleum-based diesel. [10 Ways to Power the Future]

"It opens up a vast new potential for biofuel feedstocks," said Tom Richard, director of the Institutes of Energy and the Environment at Pennsylvania State University.

Two questions remain, according to Richard, who was not involved in the study, which is published in tomorrow's (Jan. 20) issue of the journal Science: Is it economically feasible to use seaweed to produce biofuel? And is it environmentally attractive?

"We don't know the answer to either question, what this article demonstrates is that it is technically possible, which is a great first step," Richard said. "And I think in both cases there is reason to think there is a good shot."

Seaweed now joins the cadre of plants — from corn to single-celled algae — that offer tantalizingly renewable and domestically produced alternatives to fossil fuels. In the United States, ethanol made from corn is added to gasoline; in Brazil, cars are powered largely, sometimes completely, by ethanol made from sugar cane.

But converting corn and sugar cane into fuel can be problematic, since both are also food crops. Even other potential biofuel sources, like switchgrass, can compete for land in a world whose population is growing and seeking a more resource-intensive diet. [7 (Billion) Population Milestones]

"This is one of the great debates about biofuel: Is there sufficient agricultural land to produce the food we require in society and also produce significant amounts of biofuels," Richard said.

Seaweed is different; it doesn't compete with farming.

"There is a lot of biomass in the ocean, and so far people haven't really found ways to substantially exploit it," said Chris Somerville, director of the Energy Biosciences Institute, who wasn't involved in the study.

Seaweed — a relatively unexploited source of nutrition, particularly in North America — is high in sugars, which are precursors for most biofuels. Seaweed also lacks lignin, a compound that makes cell walls rigid in land plants and that must be removed before such plants can be turned into fuel.

Even so, until now, seaweed appeared to have limited potential as a feedstock for biofuel, since one of its primary sugars, alginate, couldn't be broken down efficiently enough to produce biofuel on an industrial scale.

Marine microbes already have the ability to break down alginate, transport the products and metabolize them, so Yoshikuni's team first figured out the details of how this happens. Then, they engineered another, more industry-friendly microbe, E. coli, to do something similar, spitting out ethanol at the end of a multi-step process. The last of the steps could be replaced to produce other biofuels, or even chemicals such as plastics and polymer building blocks.

This system also takes advantage of other sugars in the seaweed, mannitol and glucan, since the E. coli already possessed the ability to break down mannitol, and commericially available enzymes can easily break glucan down into a more accessible form, glucose.

This system could be used in any brown seaweed (seaweeds also come in green and red). Yoshikuni's team used kombu, kelp used in East Asian cuisine.

Both Richard and Somerville said the production of ethanol from seaweed using their microbial system would likely require more work to become cost-effective on an industrial scale.

BAL, which is testing cultivation methods at four pilot seaweed farms off the coast of Chile, is working on commercializing the process to produce ethanol and renewable chemicals, according to Trunfio. Seaweed's advantages, its high sugar content and lack of lignin, make it a viable source for biofuel from a cost perspective, he said.

There is also the environmental question.

One challenge will likely be seaweed's demand for nutrients, such as nitrogen and phosphorus, which are not naturally abundant in the oceans, Somerville said. "And generally it is undesirable to fertilize the ocean," he said.

Runoff filled with nutrients creates dead zones, with low oxygen content, as happens in the Gulf of Mexico where the Mississippi River delivers its payload of agricultural fertilizer.

Trunfio argues, however, that seaweed's need for nutrients creates an opportunity, noting BAL's seaweed farms are located near salmon farms, so the seaweed can use salmon waste as fertilizer.

Overall, Somerville was cautious about the implications of the new microbial system.

"Does this change everything? No," Somerville said. "It's the beginning of opening up a new area; it needs quite a lot of additional investigation broadly speaking to see what the real opportunity is."