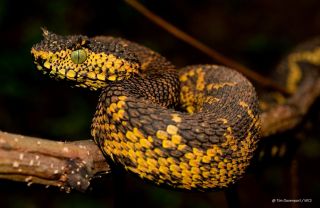 Matilda's Horned Viper, named after the daughter of one of the researchers, is a new species of bush viper.
(Image: © WCS.)

A new type of snake, a species of bush viper, was discovered in southern Tanzania during a recent biological survey. The snake's exact location is being kept secret to protect the visually striking black-and-yellow snake from illegal pet collectors.

The new species, named Matilda's Horned Viper (Atheris matildae), is described as having hornlike scales above its eyes and measuring 2.1 feet (60 centimeters). The Wildlife Conservation Society (WCS) researchers who conducted the survey named the new species after the daughter of study co-author Tim Davenport, director of WCS's Tanzania Program.

The brightly hued snake bears a resemblance to the Usambara bush viper (Atheris ceratophora), although their scales differ and the new species is considerably larger.

The viper's habitat is estimated to only stretch across a few square miles of remote forest located in a mountainous region in southwest Tanzania. The area is already severely degraded as a result of logging and charcoal manufacture, and the quality of the habitat in continuing to decline, according to the study authors.

The researchers have not disclosed the exact location of the snake's habitat to protect the species from poachers who illegally hunt rare exotic animals. Wildlife trade is now the second-largest illegal trade in the world — following the drug trade — and reptiles make up a large portion of illegally trafficked animals, according to the researchers.

The illegal hunting of reptiles in the wild can have devastating effects on their populations. In many parts of Africa, poaching is the single biggest threat to the existence of many species in the wild, according to the WCS.

Poaching could especially pose a threat to the Matilda's Horned Viper because African bush vipers of the genus Atheris are popular pets in many countries due to their attention-grabbing, colorful appearance. The continuing degradation of their natural habitat may also seriously threaten A. matildae's population.

The researchers have established a small captive breeding colony for the new snake and expect the species to be classified as critically endangered by the International Union for Conservation of Nature.

The study describing the discovery of the new species was published in the December issue of the journal Zootaxa.