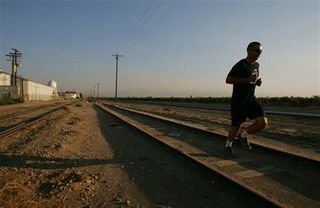 Marco Lopez jogs along train tracks Tuesday, Aug. 7, 2007 in Arvin, Calif. Arvin is home to the nation's worst air pollution. Arvin's level of ozone, the primary component in smog, exceeded the national limit by an average of 73 days per year between 2004 and 2006.
(Image: © AP Photo/Gary Kazanjian)

ARVIN, Calif. -- Lying in a rich agricultural region dotted with vineyards and orange groves, this central California community seems an unlikely place for a dubious distinction: the most polluted air in America.

Hemmed in by mountains, Arvin is the final destination for pollutants from cities as far away as San Francisco Bay, and its wheezing residents are paying the price. Many of them complain that the air smells toxic.

"It's common for people here to say, 'I'm going to the beach so I can breathe,''' said Raji Brar, a councilwoman and member of the board that oversees the San Joaquin Valley's Air Pollution Control District.

Arvin has none of the smoke-belching factories or congested freeways of cities such as Los Angeles. In fact, it produces little pollution. But the pollutants that blow in from elsewhere get trapped by the mountains, causing airborne particles to coat homes and streets and blot out views of the nearby Tehachapi range on hot summer days.

Doctors and public officials say asthma and other respiratory problems are common among the 15,000 residents who live 20 miles southeast of Bakersfield. People complain of watery eyes, dry throats and inexplicable coughs, particularly in the summer, when temperatures can climb over 100 degrees and stay there for days.

Arvin's level of ozone, the primary component in smog, exceeded the amount considered acceptable by the EPA on an average of 73 days per year between 2004 and 2006. Second on the EPA's list was the Southern California town of Crestline, at 65 days. The San Francisco Bay Area averaged just four days over the same period.

"Sometimes you go outside and can hardly breathe,'' said Irma Garza, 48, who has lived here most of her life. "The worst part is in the summertime you can't send your kids outside to play.''

Ground-level ozone is created when car exhaust and other noxious fumes are cooked by heat and sunlight. It can trigger asthma attacks, aggravate chronic lung diseases like emphysema and bronchitis and may even reduce the immune system's ability to fight respiratory infections, according to AIRNow.gov, a Web site developed by several agencies, including the EPA, that monitors ozone levels around the country.

A 2002 study in the British medical journal The Lancet found children who breathe polluted air are more likely to develop asthma, although that conclusion has been challenged by other researchers.

Specific asthma data for Arvin is not available, but surrounding Kern County has a childhood asthma rate that far exceeds state and nation averages, with 17.5 percent of children under the age of 18 suffering from the condition. The state average is 14.8 percent, the national average 12.2 percent, according to the California Department of Health Services.

Dr. Ronnie Pasiliao, who works at Arvin's community health center, said asthma and allergies are the primary conditions he treats.

Despite the health complaints, the valley's air-quality board voted in April to extend by 11 years the region's deadline to meet federal ozone standards, saying cleaning up the air by the previous target date of 2012 was not possible. Brar, the city council member, voted against that decision.

Gov. Arnold Schwarzenegger criticized the move when the California Air Resources Board voted in June to approve the local board's extension. A few days later, he fired the board's chairman.

The EPA is now considering the extension.

Brar and other local officials say Arvin has been neglected by smog regulators because its residents are mostly poor, Hispanic farmworkers.

Seyed Sadredin, executive director of the valley air district, denied that and said he is trying to improve the board's efforts in the town.

"Everything we've done here is for Arvin,'' he said. "But unfortunately, Arvin will see progress later than any other area because that's where pollution flushes out of the valley.''

In the meantime, residents make small adjustments to reduce their exposure to the dirty air.

Garza's son wears a mask when mowing the lawn. Mario Moreno, 19, who works at a local pizzeria, tries to stay indoors on hot days. He remembers feeling dazed and short of breath when outside for too long in the "nasty, muggy air.''

Air conditioning is a luxury many residents cannot afford, said Amalia Leal, a family advocate with the local school district. Without the skills or resources to relocate, many families are trapped in Arvin.

But her advice to parents with chronically asthmatic children is simple.

Ana Maria Corona is doing just that. After living in Arvin for four years and being hospitalized seven times for her asthma, she and her husband are looking for a new home in Arizona.

"It's not easy for us to leave this place,'' she said. "But what is my future here? What is the future of my children?''