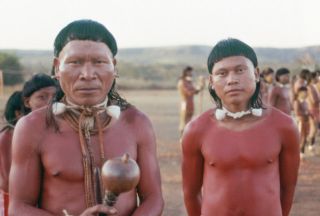 Father and son in the wai’a ceremony at the Xavánte village of Etéñitepa. In it men try to get in contact and receive the protection of spiritual powers.
(Image: © Image courtesy of Nancy M. Flowers, Hunter College, City University of New York)

Culture may trigger rapid evolution of various human features, suggests new research into the marital practices of a tribe from the Brazilian rainforest.

Evolution is often thought to be driven by environmental factors, including climate, or geographical obstacles such as rivers and mountains. Still, cultural factors — that is, groups of traditions and behaviors passed down from one generation to another — can have profound effects on behavior and also possibly lead to evolutionary changes.

To learn more, scientists analyzed genetic, climatic, geographic and physical traits of 1,203 members of six South American tribes living in the regions of the Brazilian Amazon and highlands. Their research found that one group, the Xavánte, had significantly diverged from the others in terms of their morphology or shape, possessing larger heads, taller and narrower faces and broader noses. These characteristics evolved in the approximately 1,500 years after they split from a sister group called the Kayapó, a rate that was about 3.8-times faster than comparable rates of change seen in the other tribes.

The major changes the investigators saw apparently occurred independently of the effects of climate or geography on the Xavánte. Instead, cultural factors appear responsible. For instance, in the Xavánte village of São Domingo, a quarter of the population was made up of sons of a single chief, Apoena, who had five wives. The tribe's sexual practices allow successful men in that group to father many offspring, which in turn means that any traits of theirs can quickly dominate their population.

"We have been working with the Xavante for about half a century, and from the beginning their morphology showed differences from the classical Amerindian pattern," researcher Francisco Salzano, a geneticist at Brazil's Federal University of the Rio Grande do Sul, told LiveScience. "We verified that the Xavante experienced a remarkable pace of morphological evolution."

The researchers suggest that assembling databases of cultural and biological data could help uncover other examples of how culture might influence human evolution.

"This specific piece of research is related to a long-term project of investigation involving not only the group responsible for this paper, but many others internationally," Salzano said.

Salzano and his colleagues detailed their findings online Dec. 19 in the Proceedings of the National Academy of Sciences.