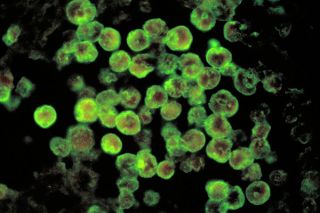 Amebic meningoencephalitis in the brain caused by Naegleria fowleri. The disease was imaged by direct fluorescent antibody staining.
(Image: © CDC)

Louisiana's state health department has issued a warning about the dangers of improperly using nasal-irrigation devices called neti pots, responding to two recent deaths in the state that are thought to have resulted from "brain-eating amoebas" entering people's brains through their sinuses while they were using the devices.

Both victims are believed to have filled their neti pots with tap water instead of manufacturer-recommended distilled or sterilized water. When they used these pots to force the water up their noses and flush out their sinus cavities — a treatment for colds and hay fever — a deadly amoeba living in the tap water, called Naegleria fowleri, worked its way from their sinuses into their brains. The parasitic organism infected the victims' brains with a neurological disease called primary amoebic meningoencephalitis (PAME), which rapidly destroys neural tissue and typically kills sufferers in a matter of days.

Jonathan Yoder, an epidemiologist with the United States Centers for Disease Control and Prevention (CDC), said the Louisiana cases are still being investigated to ascertain that the deaths did indeed result from exposure to treated tap water in neti pots, rather than exposure to untreated water in a pond or lake. If so, they are the first known incidences of the disease in the U.S. resulting from N. fowleri organisms surviving the water treatment process.

"Nearly all the cases have resulted from exposure to warm recreational water, such as ponds, rivers and lakes, and the kind of exposure where the water would be forced up the nose — for example, diving and water sports," Yoder told Life's Little Mysteries, a sister site to LiveScience. The amoeba thrives in natural waterholes, especially those in the South, and several Americans die every year from swimming in these waterholes, or using untreated water from them. However, "in the last 15 years, I'm not aware of other cases [in the U.S.] associated with treated drinking water," he said.

Municipal water undergoes a rigorous purification process to make it potable, including being treated with chlorine to kill microorganisms, he explained. "We consider chlorination to be effective in killing [N. fowleri]. I can't comment on any water system in Louisiana, but in general … you may start out with 1 million amoebas and your goal is to reduce it with chlorine, and you might get 99.9 percent out. But you're probably never going to eliminate 100 percent. That goes for amoebas, parasites, bacteria, viruses. So while we say our drinking water is safe, it's not sterile." [Can Your Tap Water Kill You?]

N. fowleri only seems capable of reaching the brain if it's given a big boost by being squirted deep into a person's nasal passages. That's why water that is considered safe to drink or bathe in isn't necessarily safe to use in a neti pot, Yoder said.

But if you only use distilled or previously boiled water in your neti pot, and you avoid snorting water when diving into waterholes, can you be sure you won't get PAME simply by splashing your face with the water out of your faucet — especially if you live in Louisiana?

Yoder said the CDC maintains that the risk of getting PAME from normal exposure to tap water is very low, but they are helping Louisiana's health department investigate the water treatment process in the state. "In general, what we're committed to is even though there are very few cases, CDC is very committed to learning more about the organism so we can prevent further infection by developing science-based prevention methods. But it is a very tragic infection and we're very sad for the families."