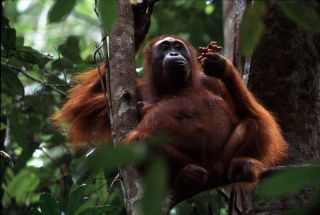 Orangutans in Borneo will eat just about any fruit in the forest. But during hard times when fruit is not bountiful, they find other sources of protein: leaves, bark and their own body-fat reserves and muscle.
(Image: © © Tim Laman)

Orangutans in Borneo can survive potential starvation by using their body fat and muscles as energy until a bounty of food is available, researchers find, adding that the results may someday shed light on the eating habits of our earliest ancestors.

The findings may also speak to various low-carb, high-protein diets, because essentially weight comes down to caloric intake for these orangutans as it does us, the researchers say.

In Borneo, an island in Southeast Asia, forests go through periods of high fruit yield, where around 80 percent or more of the plants will produce fruit all at once. Following these "masting" periods, the forests endure stretches of sparse fruit availability that can last anywhere from two to eight years. To survive in this unpredictable environment, orangutans put on fat by gorging on fruits when they're available, and then live off of these reserves until the next masting year.

Researchers have now learned that the orangutans start to metabolize their own muscles for protein after these fat reserves are gone.

"In this stage there is evidence of tissue wasting, the same kind that you would observe in anorexic patients," said Erin Vogel, an evolutionary anthropologist at Rutgers University and lead author of the new study.

Vogel and her colleagues also learned that the primates avoid extreme protein deficiency by eating tough foods, such as leaves and bark, using highly adapted molars, not unlike those found in modern humans and our hominin ancestors. By comparing the physical properties of orangutans' teeth and food with those of other primates, scientists may someday be able to tease out the diets of our ancestors, Vogel said.

The importance of protein

Protein is important for the growth and reproduction of all animals, but few studies have investigated how wild animals maintain protein balance, the researchers said. This question is especially interesting for species in Borneo because of the island's seemingly inhospitable fruit-crop cycles.

To learn about the protein cycle of Bornean orangutans, Vogel and her team followed the primates for five years — both during and after a masting period — and recorded each piece of food the animals ate. Every morning, the researchers collected urine samples from the orangutans using plastic sheets they laid out near the animals' nests. Back in the lab, they analyzed dietary markers and nitrogen isotopes (which are found in the amino acids that make up proteins) in the samples they collected.

The researchers found that the levels of the dietary marker ketone spiked after the masting period, indicating that the orangutans' bodies were breaking down fat reserves for energy. After several months of spiked ketone levels, the orangutans' urine showed more nitrogen than could have come from their eating habits, indicating that their bodies had begun to metabolize their muscles for protein. If the orangutans experienced prolonged muscle wasting, or the use of muscle for protein, it could leave permanent damage.

"The good thing is that they will eventually have a masting and go through this cycle again," Vogel said.

During these times when fruits weren't readily available, the orangutans supplemented their diets with leaves and bark, which are higher in protein than fruits. However, because of the time and energy it took to eat the tough foods, the animals were actually eating less and getting less overall protein than they were before. The amount of daily protein they were getting would be insufficient for humans, but it was enough to avert a severe protein deficit for the orangutans.

The study shows that the orangutans put on fat only during periods of high protein and caloric intake. “You gain weight when you take in more calories than you burn — it’s something that nutritionists have known, but a lot of the high-protein, low-carb diets have lost sight of that,” Vogel said. A future study could look at how the orangutans’ ratio of protein to carbohydrate intake changed over time and how it affected their metabolism, she said.

Herman Pontzer, an anthropologist at the Hunter College of the City University of New York, adds that the study “marks a new era in ape evolutionary biology.” Previous primate studies have focused on behavior and anatomy of the animals, but haven’t really brought physiology into the mix. “It’s always fun to see these new ideas and new approaches applied to interesting questions about apes,” said Pontzer, who was not involved in the research.

Pontzer was surprised to see how “close to the edge” the orangutans seem to be living and is curious to see if other apes have similar protein situations. Gibbons, for example, also survive on fruit in the Borneo forests.

“A big implication [of the study] is just how much we still need to learn about the living apes,” Pontzer said.

In addition, the results speak to the problem of deforestation, Vogel says, as the study shows partially logged forests in Borneo are better than no forests at all. The orangutans are still able to get the protein they need to survive in these areas, even though the partially logged forests are not their primary habitat. “The forests still have biological value and should be conserved so that biodiversity that can survive there,” Vogel said.

The study was published yesterday (Dec. 13) in the journal Biology Letters.