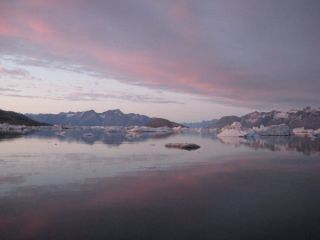 Only once in more than a century have icebergs calved off one of the largest glaciers in Greenland as quickly as they are today due to warming waters, scientists find.

Any further warming of the ocean around Greenland is likely to increase ice loss there, researchers said.

During the earliest years of this century, the Greenland ice sheet lost the largest amount of ice ever recorded. The exact cause of this loss is still debated, but the fact that glaciers in both western and southeastern Greenland changed at approximately the same time suggests that large-scale climate factors might be involved, such as increasing air and ocean temperatures.

To find out more, scientists analyzed the history of Helheim Glacier, one of the largest glaciers in southeastern Greenland. By extracting cores of sediment from Sermilik Fjord, where the glacier ends, researchers could deduce iceberg calving activity dating back to about 1890.

Sand grains are laid down annually at the bottom of the fjord by icebergs calving from the glacier. The amount of sand deposited there in layers is therefore a measure of how much ice broke off there.The researchers found large fluctuations in calving rates. The exceptionally high rate seen at the beginning of this century was only matched by equally high rates in the late 1930s.

By comparing what climate now had in common with the 1930s at the glacier, the investigators suggest that calving activity is high when the waters off Greenland are influenced more by warmer Atlantic Ocean water and less by colder polar waters, and when summers in the region are warm.

Overall, Helheim Glacier's iceberg activity is linked to short-term fluctuations of large-scale oceanic and atmospheric conditions such asthe North Atlantic Oscillation, which affects atmospheric pressure from Iceland to the Azores and influences where and how many winter storms cross the Atlantic. These seem to work on the glacier on time scales of three to 10 years.

"Our study suggests that the calving rates seen in the past are linked with natural climate variability," researcher Camilla Andresen, a geologistat the Geological Survey of Denmark and Greenland in Copenhagen, told OurAmazingPlanet. "How much of the recent increase in calving is related to natural variability and how much relates to human-induced warming is not easy to differentiate. Regardless, our study indicates that any further warming of the ocean around Greenland is likely to increase the mass loss from the Greenland ice sheet."

The scientists detailed their findings online Dec. 11 in the journal Nature Geoscience.