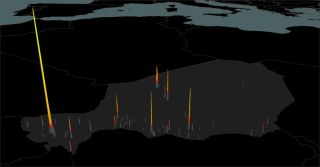 3D plot of Niger showing the brightness of areas of Niger over the course of a year. The taller peaks are brighter, which the researchers assume means they are more populous.
(Image: © Science/AAAS)

The bright lights of a big city, as seen from space, may predict outbreaks of some diseases, such as measles, and help officials to prevent epidemics.

To test their theory — a process known as proof of principle study — the researchers focused on satellite photos of several cities in the central-west African country of Niger, where measles is a severe problem. More than 60,000 kids are infected there every year.

Niger is an example of a country where many people live in rural areas during the farming season and move to the urban areas when it gets dry. Researchers thought that if they could pinpoint the areas of increasing population, using the brightness of homes and businesses as their guide, they also would be pinpointing measles outbreak hotspots.

Photos of the city of Naimey over time showed "there are some parts of the city that lag behind when they brighten. It's still during the dry season, but it's later. The same pattern occurs with measles infections," study researcher Nita Bharti of Princeton University told LiveScience."That might be an important part of when you might want to vaccinate in these areas."

Globally, measles kills about 600,000 kids annually. The death rate from the disease in areas of Niger is exceptionally high, between 4 percent and 6 percent, or around 3,000 kids per year.

After a previous study analyzing the measles outbreaks in Niger, "we noticed a very strong seasonality to the epidemic pattern," Bharti said. "We didn't know why we were seeing those patterns. [It] seemed like a really important thing to understand if we were going to stop these outbreaks."

Because measles is spread person to person, through coughs and sneezes or touch, Bharti and her colleagues thought the area's population density might play a role in the outbreaks. To get a close look at how these populations changed over time, they analyzed satellite images taken by the Operational Linescan System of the U.S. government's Defense Meteorological Satellite Program.

The images were broken up into blocks of 1 square kilometer (0.4 square miles). The researchers used the brightness of any area as an estimate of its population, and compared these estimates to detailed records of previous measles epidemics. The best epidemic records were kept for the cities of Niamey, Maradi and Zinder.

Researchers saw that the populations of the neighborhoods varied seasonally: high during the dry season and low when wet. The times when the population peaked were also times when measles outbreaks were at their worst.

The seasonal swings were probably due to how these people make their livings: "This is a highly agriculture-dependent economy. About 90 percent of jobs are related to agriculture in some way," Bharti said. "During the rainy season, people are in lower population density rural areas engaged in agriculture, and in the dry season they move to urban areas to look for work."

This would also explain the differences the researchers saw between cities. The northern city of Agadez is located in the desert and has an economy based on uranium mines, a non-seasonal operation. This city showed the lowest flux in brightness. The researchers had only district-level data on measles outbreaks in the area, so it wasn't included in their main analysis, but the data showed less seasonality.

Knowing when specific cities and neighborhoods are in the most danger of outbreaks can help put vaccination teams on high alert. If they can get to growing areas soon enough, they can stop an outbreak before it reaches critical mass, the researchers said.

"You could kind of access the risk of outbreak based on the brightness," Bharti said. "This suggests that the areas that brighten earlier need to be vaccinated earlier."

This kind of analysis can be used on other diseases, to understand how population fluctuations impact their spread. "This approach could be applied towards any disease that's driven by changes in population density," Bharti said. It could also be used to track populations moving because they've been displaced by war or natural disasters.

The study will be published in the Dec. 9 issue of the journal Science.