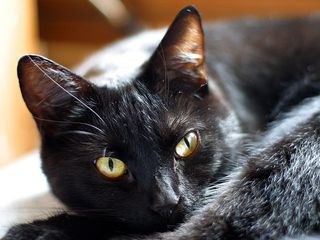 Cats, like dogs, may need to be monitored for heartworms if they are exposed to environments that put them at risk for the disease.
(Image: © Courtesy of PDPhoto.org)

Heartworm disease is a growing epidemic for pets in the United States, and while dogs are often associated with the disease, it can also be devastating to cats.

The disease is caused by Dirofilaria immitis, a type of nematode. An intermediate host is required for the maturation of the filarial nematodes, which are picked up and enter the bloodstream of a host as microfilariae, which are immature heartworms (before the first larval stage).

The heartworms take about two weeks to progress through their first three larval stages, at which point they can be transmitted to a secondary susceptible host. Once transmitted, the heartworms molt into further larval stages and take about six months to become sexually mature. If both nematode sexes are present in a bloodstream, they can produce more microfilariae, although that is uncommon in cats.

In cats, however, microfilariae are rarely, if ever, detected. Cats are actually not the natural host for the parasite. Felines are a resistant, but susceptible, host, and the parasite can get trapped in ectopic sites, such as the central nervous system or other body cavities.

More commonly, adult heartworms lodge in the right pulmonary artery and the right ventricle of a cat's heart, usually without severely obstructing blood flow. While the heartworms can cause serious problems, they can live for years with or without causing symptoms. Heartworms are not diagnosed as often in cats as they are in dogs, in part because the symptoms often resemble asthma or other respiratory problems.

Because the cats generally do not show symptoms and there is no current treatment for the disease in felines, the illness may prove fatal without warning.

Because diagnosis of feline heartworm is difficult and to the disease isn't curable, prevention is essential, especially in locations where heartworms are a constant presence. There are oral and topical heartworm preventatives for cats, some of which can also fight other parasites like roundworms, hookworms, whipworms, fleas and ear mites.

For more information on feline heartworm disease, to get your animal tested or to purchase preventatives speak to your veterinarian.