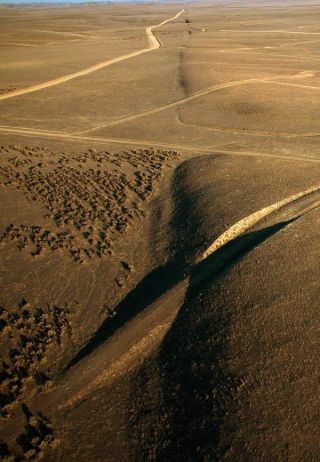 Mysterious variations in earthquake activity along the San Andreas fault may be due to saltwater seeping into the rock there, scientists find.

Seismic activity varies significantly along a 30-mile (50-kilometer) stretch of the San Andreas. Motion along this zone from Parkfield, Calif., to Cholame, Calif., can result in earthquakes in some segments of the fault, but other portions stay relatively steady.

Researchers had suspected these differences might be due to liquid seeping into rock at some places and weakening it, enabling faults to slip. To learn more, investigators scanned for signs of underground fluid by looking at variations in electrical conductivity along the San Andreas.

Water is typically more electrically conductive than rock, with saltwater far more conductive than freshwater. The presence of water in rock can thus influence naturally occurring electrical currents in a way that magnetic and electric sensors can detect.

After three years of gathering data, a team of scientists detected what appeared to be interconnected networks of fluid in the lower crust and upper mantle of the fault area. Near Cholame, tremors concentrated where fluid seemed trapped, and near the drill hole of the San Andreas Fault Observatory at Depth, northwest of Parkfield, zones of high electrical conductivity infiltrate the entire crust.

"It was most exciting to see all these electrically conductive zones, which we interpret in terms of the presence of fluids," researcher Michael Becken, a geophysicist at the GFZ German Research Center for Geosciences at Potsdam, told OurAmazingPlanet.

The liquid in question is salty as seawater, although the salts aren't the same (and they aren't just table salt; salts are more-generally compounds that form when a negatively charged element or compound combines with a positively charged one). And the salty liquid isn't present in anything like large pools or streams.

"The fluid is contained in the pore space of the rocks and makes up only a few percent, but if the pores are interconnected, the fluid can make an entire rock volume conductive," Becken said.

Becken and his colleagues hope to expand their studies in both directions along the San Andreas fault. They detailed their findings in the Dec. 1 issue of the journal Nature.