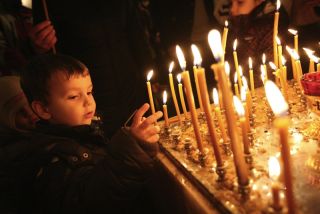 Despite not believing in God, a significant number of atheist scientists want to expose their children to religion.
(Image: © haak78 / Shutterstock.com)

They may not find much meaning in the birth of Jesus Christ, but many atheists embrace religious traditions such as churchgoing for the sake of the children, a new study finds.

The research, which focused on atheist scientists, found that 17 percent of atheists in the study attended a religious service more than once a year. The atheists embraced religious traditions for social and personal reasons, they told the study researchers.

"Our research shows just how tightly linked religion and family are in U.S. society — so much so that even some of society's least religious people find religion to be important in their private lives," Rice University sociologist Elaine Howard Ecklund, the study's principal investigator, said in a statement. Ecklund and her colleagues reported their findings in the December issue of the Journal for the Scientific Study of Religion.

Earlier research by Ecklund has revealed that the line between believing and not believing in God is not always bright. For example, in research released in June 2011 in the journal Sociology of Religion, Ecklund and her colleagues found that about 20 percent of atheist scientists are "spiritual," if not formally religious.

In the current study, the researchers chose a sample of 275 participants pulled from a larger survey of 2,198 science faculty at 21 elite U.S. research universities. Half of the original survey sample said they were religious, while the other half were not. [Infographic: The World's Top Religions]

The atheist parents surveyed had multiple reasons for attending religious services in the absence of religious belief. Some said their spouse or partner was religious, and encouraged them to go to services as well. Others said they enjoyed the community that attending a church, mosque, temple or other religious institution can bring.

Perhaps most interesting, Ecklund said, was that many atheist scientists take their children to religious services so that the kids can make up their own mind about God and spirituality.

For example, one study participant raised in a strongly Catholic home said he later came to believe that science and religion were not compatible. But rather than passing that belief onto his daughter, he said, he wanted to pass on the ability to make her own decisions in a thoughtful way. So he exposes his daughter to a variety of religious choices, including Christianity, Islam and Buddhism.