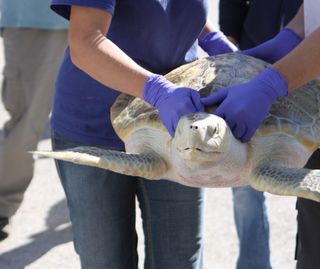 Kemp's ridley sea turtles prefer warm waters in the Gulf of Mexico and the Atlantic Ocean. So how did one end up in the chilly Netherlands? Marine biologists think the turtle became "cold-stunned" by cold water and drifted thousands of miles. Cold-stunning can shut down turtles' bodily functions and even kill them, according to Mote Marine Lab, but fortunately, Johnny Vasco de Gama was rescued. Officials at the Rotterdam Zoo stabilized the turtle and sent him to the aquarium Oceanario de Lisboa in Portugal. The aquarium, in turn, transferred the turtle to Zoomarine, a marine-based theme park in Portugal, for more rehab.
(Image: © Mote Marine Laboratory)

When Johnny Vasco de Gama showed up in the Netherlands three years ago, he was a nameless, frigid sea turtle with little chance of surviving much longer in the icy waters of the North Sea. But now, this accidental world traveler is back in the United States and will soon be released into the warm waters his species calls home.

The turtle, dubbed "Johnny" by rescuers in the Netherlands, had "Vasco de Gama" appended to his name in Portugal, where marine biologists at the ocean theme park Zoomarine nursed him back to health. The turtle is a Kemp's ridley sea turtle, a critically endangered species and the rarest of all sea turtles. For that reason, an international team of conservationists has worked hard to bring Johnny back to the waters of the Gulf of Mexico. On Tuesday (Nov. 29), Johnny arrived at Mote Marine Laboratory in Sarasota, Fla., where staff checked him out and placed him in a holding tank in preparation to release him into the Gulf. [See pictures of Johnny's trip]

No one knows exactly how Johnny made it all the way to the Netherlands, thousands of miles from his home territory in the Gulf of Mexico and along the eastern coast of the U.S. According to Mote Marine Lab, the turtle likely got caught in cold currents and become "cold-stunned," a condition that can shut down turtles' organs and even kill the animals. In that state, Johnny may have drifted hundreds or thousands of miles before being found in November 2008.

Once rescued, Johnny was stabilized by Rotterdam Zoo employees and then sent to the aquarium Oceanário de Lisboa in Portugal the following summer. The aquarium, in turn, sent the turtle to Zoomarine for rehabilitation.

After an international process of permit-getting and transport-organizing, Johnny the turtle made it back to the U.S. side of the pond in considerably greater style than his outbound journey: He flew in a specially adapted plane donated by the Portuguese airline TAP.

At Mote Marine Lab, Johnny underwent a veterinary exam on Tuesday and is now on medical hold to be sure that he's ready for release back into the wild. As soon as he's cleared, Johnny will be set free in southwest Florida waters.