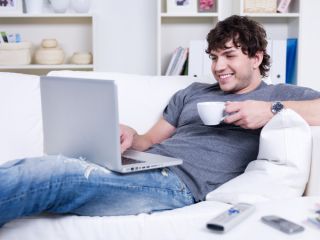 A computer with a wireless Internet connection hurts sperm, but not because the machine can heat up your lap, a new study suggests.

The findings showed that sperm cells collected in lab dishes and placed beneath a laptop with a wireless Internet connection for four hours had less motility and more DNA damage than sperm placed in another room, away from electronic devices but kept at the same temperature.

"It is well-known that increased temperature may decrease sperm quality, and the use of portable computers on the lap increases scrotal temperature," the researchers wrote in their study.

But the findings suggested it wasn't the temperature beneath the laptop that was affecting sperm; instead, the radiation from the laptop was slowing the swimmers, according to the study.

The researchers in Argentina and Virginia used semen samples from 29 healthy men, whose average age was 34. The laptop was set to download and upload information over the course of the experiment, so the wireless connection was actively being used. The temperature under the laptop was held constant at 77 degrees Fahrenheit by an air-conditioning system.

Wireless Internet connections use radio-frequency electromagnetic waves. When the researchers measured the radiation coming from a laptop wirelessly connected to the Internet, they found it was at least three times higher than an unconnected laptop, and seven to 15 times higher than radiation in a general setting, according to the study, though the levels varied over the course of the experiment, depending on the flow of information coming to or from the computer.

There was no difference between the sperm samples held under the laptop and those kept away from it in terms of the percentage of sperm that were dead at the end of the experiment, according to the study.

Still, sperm motility and having undamaged DNA are important for fertilizing an egg.

"We speculate that keeping a laptop connected wirelessly to the Internet on the lap near the testes may result in decreased male fertility," the researchers wrote in their conclusion.

Why sperm cells are vulnerable

Sperm cells are different from other cells in the body — their DNA is highly condensed into a small area, the researchers noted. This could make them more vulnerable to the effects of such radiation.

It's plausible that the magnetic and electromagnetic fields produced by the radio waves damage molecules in sperm called phospholipids, which are a needed to keep membranes within a sperm cell intact, the study researchers wrote.

It is not known whether all laptop computers might have the same effects as those seen in this study, nor is it known what other factors might heighten or lessen the damage, the researchers wrote in their conclusion.

"However, we cannot discard the possibility that damage to sperm is caused by the low radiation produced by the computer without Internet connection," they wrote, and this possibility should be studied further.

The study was published online Nov. 23 in the journal Fertility and Sterility.

Pass it on: Radiation from wireless internet connections might damage sperm cells.