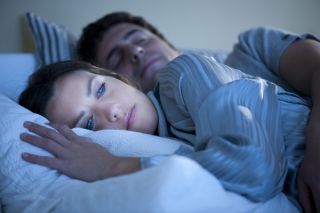 A British woman claims she has been touched and groped by an unseen presence at night and suspects her assailant is a perverted poltergeist.

Doris Birch, a grandmother in Herne Bay, England, told ThisIsKent.co.uk, "It's like an octopus. It started four months ago. I was lying in bed when I felt this creepy pair of hands. I kicked frantically and it went away. Next time it came I hurled the duvet onto the floor!"

It has happened several times since then. Thinking that her experience was perhaps being caused by her bedding, Birch tried sleeping without the duvet, and even replaced her mattress. But the touching continued. A blogger for the Huffington Post, Alexandra Holzer, suggested that the best way to investigate Birch's odd phenomenon is with a psychic ghost buster and a close look at the history of the home. Holzer suggested that Birch was being plagued by the ghost of a sexual pervert who may have assaulted other women in years past; even death could not stop this serial groper, and his spirit is still getting thrills from touching this grandmother as she sleeps.

That may be one explanation, but before calling in ghost hunters and psychics to deal with this sexual harasser from beyond the grave, Birch might be interested in a more likely explanation for her experiences, one that I explored in my book "Scientific Paranormal Investigation."

Reports of groping ghosts are actually not as rare as you might guess. While the vast majority of ghost reports involve blurry figures or round white spots, seen both in photographs and in person, many reports come from people just like Birch, who feel unseen (or barely seen) presences in bed late at night.

Belief and psychology often play an important role in ghostly phenomena.The biggest clue to understanding what's going on in Birch's bedroom is the fact that the gropes always occur at night, when she is either asleep, drifting off to sleep, or waking from sleep. Psychologists know that the brain is especially susceptible to hallucinations and waking dreams during these times when consciousness fades. People often have these hallucinations while waking up (called hypnopompic activity) and while falling asleep (called hypnagogic activity). These are no more real than an ordinary dream, but can cause fear and concern if the person believes that the experiences were caused by some ghost or evil entity. [Alien Abductions Might Be Vivid Dreams, Study Shows]

People who experience these hallucinations often describe themselves feeling terrified, paralyzed, touched, and held or pushed down by some unseen force. Most are also convinced that they were fully awake at the time. Birch's report matches this phenomenon, and she is hardly the first to succumb to it: This phenomenon is probably the root of the succubus, a sensual demonic she-demon of medieval lore that sexually attacks men as they sleep.

It's important to note that many perfectly sane and rational people report these experiences. Folklorist David Hufford, in his book "The Terror That Comes in the Night," estimates that about 15 percent of people experience being assaulted in their sleep by an unknown entity at some point in their lives. The "attacks" are the result of ordinary brain functions, the form and specifics of the attacks are shaped by the victims’ belief system.

This psychological — as opposed to paranormal — explanation also answers two other aspects of Birch's experience. The strange phenomenon stopped as soon as she kicked at it, because she was fully awake by that point. It's also why changing the mattress didn't drive the ghost away; the problem was not in the mattress, nor in her house, but in her sleep disturbances.

It's not surprising that people who are not knowledgeable about psychology interpret their experiences as not only real and frightening, but also as being caused by a ghost. Ironically, the ghost-hunting psychics are more likely to fuel Birch's fears than to calm them. After all, the truth is more comforting than believing you're being groped by the ghost of a deceased pervert.