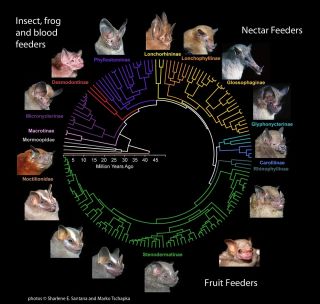 The leaf-nosed fruit bat's unique head shape gave them the strong bite that allowed them to gnaw hard fruits. All of the New World fruit eating leaf-nosed bats (the green lines) evolved in the last 15 million years, since they developed this new skull shape. They make up 65 of the 200 New World leaf-nosed bats.
(Image: © Sharlene e. Santana and Marko Tschapka)

What would you do for a bite of a tasty fig? Some fruit bats rearranged their whole face to get a morsel. Their unique head shape gave them the strong bite that allows them to gnaw hard fruits, and eventually grow into a diverse array of species.

"There is this really spectacular group of bats that have tons of different species that eat tons of different kinds of things," study researcher Elizabeth Dumont, of the University of Massachusetts, Amherst, told LiveScience. "We were interested in finding out why they are so diverse and what makes them so special."

The researchers focused on leaf-nosed bats found in the New World (a type of microbats in the suborder Yangochiroptera), that includes about 200 bat species that live in Central and South America. They include the blood-lapping vampire bats, bats that eat insects and fruits, and even some that eat lizards and frogs.

Of these 200 leaf-nosed bats, more than a quarter (65 species) seem to have evolved from a fruit-eating bat in the last 15 million years. The researchers wanted to know how this fruit-eating group was able to grow and expand their diversity so quickly.

To do so, Dumont and co-author Liliana Davalos, of Stony Brook University in Stony Brook, New York, analyzed the bats' genetic code and placed them in a family tree ranked by how recently they had evolved. They then compared this data to diet information (collected from feces samples) and head size and shape information from museum samples. The researchers also tested the bite strength of wild bats, since chomping on hard fruits can be tough on the jaw.

From this information they were able to tell that the fruit-eating leaf-nosed bats diversified very quickly once their stubbier skull developed, about 15 million years ago, separating them from insect eaters and other leaf-nosed bats. The bite-strength tests showed that a shorter snout would have allowed these fruit-eating bats to eat hard fruits that their longer-snouted relatives likely couldn't. The result: The fruit-eating bats expanded their diets and their species numbers.

"We are able to show there was a change in the shape of the head when they became fruit eaters, allowing them to bite harder," Dumont said. "That new head shape and that new ability to bite harder allowed them to go out and invade a brand-new niche, to go out and eat these fruits."

During the day monkeys and birds would eat these hard fruits, like figs, but at night, the bats were free to forage. Humans might think of figs as plump, juicy fruit, but many species of fig have fruits that are hard and their tasty goodness is difficult to reach, especially for tiny bats.

The shorter snout acts like a nutcracker: The closer to the hinge the fruit is, the more pressure is applied, so when the snout is short, the bats bite with more force. These skull changes would have also required changes to their teeth and even digestive tracts to deal with the new diet.

Interestingly, fruit-eating bats from other bat groups don't have the skull adaptations like the microbats, probably because their large size — they are on average bigger — and associated stronger mouths would mean eating fruits isn't such a chore, Dumont said.

The study was published yesterday (Nov. 22) in the journal Proceedings of the Royal Society B: Biological Sciences.