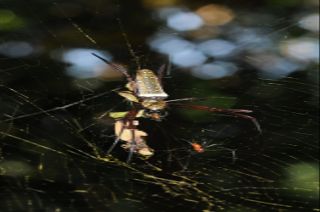 Just as a homeowner might adopt a large dog with an equally large bark to protect his or her property, a certain orb spider makes a similar investment to protect its web, according to new research that finds this arachnid uses a chemical in its web silk to repel ant burglars.

"Ants are often found in webs of some web-building spiders, but they are rarely observed foraging in webs of orb-web spiders, though ants are potential predators," study researcher Daiqin Li, at the National University of Singapore, told LiveScience in an email.

"There must be other mechanisms of protection of ant invasion. One possibility might be some chemicals that could deter/repel ants."

To figure out what was chasing the ants away, the researchers collected wild orb-web spiders (Nephila antipodiana) and analyzed their silk for chemicals. They found one, called 2-pyrrolidione, present in the silk strands that ants seemed to avoid in the lab, including the widespread Pharaoh ant (Monomorium pharaonis) and two others. Even when tempted with a free tasty snack, the ants wouldn’t cross the silk strands that had been coated with this deterrent.

"Golden orb-web spiders produce a chemical in their web silk that deters ant invasion, which adds chemical defense to the impressive properties of spider silk, already known to be strong, elastic and adhesive," Li said.

The researchers also discovered that young spiders don't need to make this chemical, because their silk is too thin for even tiny ants to cross. Larger juveniles and adult spiders make the ant-deterrent to stop ants from invading their homes and their web, their fresh-caught prey and even the spiders themselves.

The researchers aren't sure how the spiders make this chemical (whether they add it to their silk or paint it on later), or how it works. The chemical isn't what scientists call "volatile," so it doesn't produce a smell. The ants could be "tasting" the compound, because they only avoid the silk after they come into contact with it, but will stay in the vicinity even after that contact.

"The orb spider is potentially vulnerable to attack from groups of ants while sitting in its web waiting for prey, so the chemical defense in web silk may have evolved to not only protect the spider, but to reduce the time and energy that would otherwise be required to chase away invading ants," study researcher Mark Elgar, from the University of Melbourne, said in a statement.

They've also found similar chemicals in other spider silks, which indicates this type of chemical deterrent could be widespread in spiders. Interestingly, the same 2-pyrrolidione compound has been seen in glands of the ant Crematogaster sjostedti — the same glands that make chemicals that signal a warning to other ants. The spiders could be mimicking these chemical warning signals.

The study was published today (Nov. 22) in the journal Proceedings of the Royal Society B: Biological Sciences.