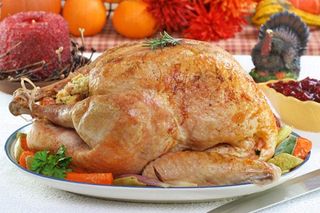 Counting your blessings this Thanksgiving won't just cheer you up — it can improve your health and energy levels as well, various studies show.
(Image: © Dreamstime)

Rather than rolling your eyes when it's your turn to bow your head and give thanks, try being grateful. The result just might be good for you. From boosting your mood to improving your relationships, research shows that being thankful is good for your health.

If you don't want to voice your gratitude, writing a letter may do the trick, according to various studies by Steve Toepfer of Kent State University at Salem and his colleagues.

"If you are looking to increase your well-being through intentional activities, take 15 minutes three times over three weeks and write letters of gratitude to someone," Toepfer said in a statement, referring to a 2011 study published in the Journal of Happiness Studies.

Toepfer and his colleagues had 219 students with an average age of 25 fill out questionnaires to gauge their well-being, returning to the lab to fill out the survey three more times, with each visit about a week apart. Some of the students wrote a letter of gratitude each time they returned to the lab, while the control group didn't write about being thankful.

"The letter writers were instructed to write a letter of gratitude to anyone they wanted, however, the letter couldn't be trivial and it couldn't be a 'thank you' note for a gift or 'thanks for saying hello to me this morning,'" Toepfer said. "The participants had to write about something that was important to them."

The results showed that the subjects' levels of happiness and life satisfaction improved after each letter they wrote. In addition, depressive symptoms decreased over time with the letter writing.

Similarly, in a study published in 2010, researchers from the University of California, Riverside, and Duke University in Durham, N.C., asked 220 participants ages 20 to 71 years to write letters of gratitude over a 6-week period, while the control group was asked to list their past experiences. The study found that participants who wrote letters of gratitude demonstrated larger increases in life satisfaction than the subjects in the control group.

Counting your blessings doesn't just cheer you up — it can improve your health and energy levels as well.

A 2007 study conducted by researchers at the University of California, Davis, and the Mississippi University for Women found that organ-transplant recipients who kept "gratitude journals" listing five things or people that they were grateful for each day scored better on measures of general health, mental health and vitality than those who only made routine notes about their days. The study was presented at an annual meeting of the American Psychological Association.

"We found that increased feelings of gratitude can cause people’s well-being and quality of life to improve," study researcher Robert Emmons, a professor who specializes in the study of gratitude at UC Davis, said in a statement.

For some couples, these positive feelings lasted until the next day. The findings suggest that everyday gratitude serves as an important relationship-maintenance mechanism and can help to strengthen romantic bonds, according to the researchers.

"We are all walking around with an amazing resource: gratitude," said Toepfer, author of the Kent State University study. "It helps us express and enjoy, appreciate, be thankful and satisfied with a little effort. We all have it, and we need to use it to improve our quality of life."