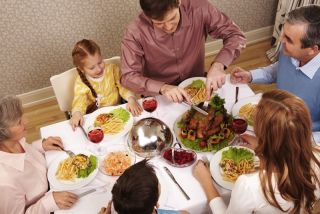 This Thursday, American families will gather around food-laden tables to celebrate Thanksgiving. But what is family, anyway? According to research by Indiana University, Bloomington sociologist Brian Powell, the answer to that question isn't simple. In fact, Americans' definition of "family" has shifted over the years, especially in, though not limited to, the case of gay couples.

Powell and his colleagues interviewed a sample of more than 700 nationally representative Americans about family in 2003, and then completed another set of interviews with other nationally representative samples in 2006 and 2010. Their book, "Counted Out: Same-Sex Relations and Americans' Definitions of Family" (Russell Sage Foundation, 2010), details the evolving view of family among the American public. Before joining our own families around the Thanksgiving turkey, LiveScience talked with Powell about what family means, why the definition matters and how people weigh commitment.

LiveScience: Why is it important to ask Americans how they define a family?

Powell: Part of what inspired this book are the symbols that we have out there of what we see as a family. For example, if you go into airports and look for family bathrooms, you very likely are going to see pictures of a woman, a man and a child. You see these kinds of images all over.

We hear about family-friendly policies, we hear about tax laws that are friendly to families. The discussion out there assumes a very clear-cut understanding of "family." Certainly, the current debate regarding same-sex marriage links closely to these understandings. If you think a same-sex couple is a family, then you probably will believe that they should have the rights of families, such as the right to get married. And if you do not count same-sex couples as family, you won't be in favor of same-sex marriage.

LiveScience: What do Americans consider a family?

Powell: What we find is that almost everyone counts a husband, wife and children as family. On the other side of spectrum, about 10 percent count housemates who live together as a family. Over time, those two patterns didn't change much at all.

To me, the most interesting groups are those that actually we saw a fair amount of change. For example, in 2003, 55 percent said that a lesbian couple with children counts as a family. In other words, even in 2003, slightly over half of Americans basically were saying some same-sex couples count as family. In 2006, it was 61 percent. And now in 2010, it's about two-thirds, 66 percent.

LiveScience: Does it differ between lesbians and gay men?

Powell: There's a little bit of a difference, with lesbian couples being a little more likely to be seen as a family than gay couples, but the difference was smaller than we thought.

With the different family arrangements we looked at, we were able to divide the responses into three different groups. In the book, we called one group exclusionist, although you could use the terms traditional or closed. This is the group that had the most narrow definition of family: Same-sex couples don't count as family under any circumstances. And for heterosexual cohabitating couples, the exclusionist group was ambivalent.

On the other side is the group that we called inclusionist, modern or open. Their definition of family is one that accepts basically all, with the exception of housemates.

Finally, there is this group in the middle. This is the group that's going to have the most influence on where public opinion is going to move. You could call them moderates, transitional, or using the closed-open comparison, "ajar." To this group, if there are children involved, even if you're in a "non-traditional living arrangement," that makes you a family. [Infographic: Marriage & Divorce Stats]

LiveScience: Where do these moderates draw the lines for family?

Powell: The most frequent comment is that children are fundamental. To this group, by definition, [having] children means family.

For those who are unmarried, either by choice or because they're not allowed to get married, you have to look elsewhere for signals of commitment. Because having a child is a signal of commitment, it means, as one person said, "You're in it for the long haul."

LiveScience: When it comes to same-sex couples, are people becoming more accepting because same-sex marriage is becoming more common, or does the attitude change come before the policy change?

But it can also be the other way around. As people become more accepting of same-sex marriage, public opinion can influence policy.  And public opinion is changing. There has been a greater openness among gays and lesbians about their lives. There is a general principle in social psychology, the contact hypothesis. The more contact you have with people, the more comfortable you are with them. If you are around people and you don't know any of them are gay, your views of same-sex marriage are going to be very different than if you're around people you know are gay. If people had gay relatives or friends who were gay, they were the least likely to be exclusionists.

Powell: It's generally true that the more expansive your boundary is of what counts as family for one group, the more open you will be to some other groups.

There are some differences on this. We found, for example, that there was one group of people who counted same-sex couples without children as family but didn't count cohabitating heterosexual couples without children as family. It was about 5 percent. What this group said was that heterosexual couples can get married. So they're choosing not to get married and not to have children. Gay couples can't get married in most states, so it was reasonable to assume that an unmarried gay couple should be counted as family.

LiveScience: Are you planning to run this survey again in the future?

Powell: Assuming the money is available, I hope to do this in the future as well. I think there's a great deal of change that's going to happen.

When I first did the survey in 2003, I wasn't planning to do it again. But the interviews got me thinking that Americans' views on this topic may well change. After the court case in Massachusetts that legalized same-sex marriage, there was a flurry of ballot initiatives to prohibit same-sex marriage. So, we were really interested to see whether the backlash was going to lead to more conservative views or whether change could lead to a broader definition.

LiveScience: What would you expect to see in future surveys?

Powell: My general sense on what's going to happen is that the exclusionist group is going to continue to decrease in size. There are many reasons for my prediction, including the increasing contact with gay men and lesbians. Another factor is the incredible openness of youths and young adults. Even if no one changed their minds at all, you would end up every year with a new group of young people entering adulthood. Just by definition, that should lead to an expanded definition of family.