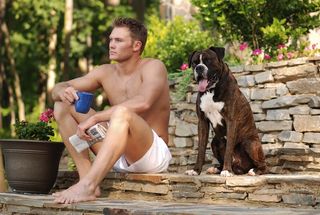 Men who show skin are viewed as more sensitive, but less competent than those who are fully clothed, suggests new study that shows a similar response to scantily clad women.

The research reveals that semi-naked people aren't necessarily viewed as mindless objects, but are instead attributed a different kind of mind, study researcher Kurt Gray, a University of Maryland psychologist, said in a statement.

"An important thing about our study is that, unlike much previous research, ours applies to both sexes," Gray said.

Earlier theories of objectification have focused on the continuum between viewing someone as a fully mindful human and as an inanimate object. However, Gray and his colleagues focused on a different continuum that goes from being passive to being active.

According to the researchers, people view others as having two aspects of mind: the ability to plan, act and exert self-control — called "agency" — and the capacity to feel, called "experience."

For the current research, Gray and his colleagues carried out six experiments on both male and female volunteers. In each experiment, the participants were subtly nudged to focus on the body or the mind of other people. For example, in the first experiment, 159 students were given a questionnaire along with a photo and description of either "Erin" (a woman) or "Aaron" (a man). The description was always identical, but in some cases the photograph was of Erin or Aaron's face, and in some cases it was a chest-up shot, with Erin wearing a bikini top and Aaron bare-chested.

The results consistently revealed that both men and women assign less agency, or competence, to people who weren't wearing clothes. But they also give naked people more credit for experiencing emotion, sensation and other aspects of experience.

"We also show that this effect can happen even without the removal of clothes," Gray said. "Simply focusing on someone's attractiveness, in essence concentrating on their body rather than their mind, makes you see her or him as less of an agent and more of an experiencer."

That perception may be good or bad. For example, Gray said, "A focus on the body, and the increased perception of sensitivity and emotion it elicits, might be good for lovers in the bedroom."

People wearing few clothes were seen as having less moral responsibility, but at the same time they were seen as more deserving of protection, the researchers report online Nov. 7 in the Journal of Personality and Social Psychology.

Nonetheless, baring all, or even some, could work against a person's best interest, Gray said. For example, an increased desire to protect a scantily dressed woman from harm could play into the "benevolent sexism" that holds that women are weak and unable to fend for themselves, Gray said.