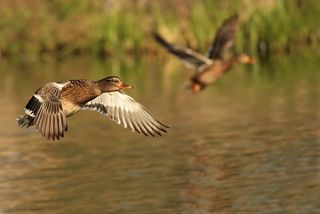 Enantiornithine birds, which went extinct along with the dinosaurs, nested by the water much like modern ducks, a new fossil find reveals. One big difference: Enantiornithines had teeth.
(Image: © papkin, Shutterstock)

LAS VEGAS — Clawed, toothy birds that lived at the same time as the dinosaurs dwelled in nesting colonies not unlike ducks and flamingos today, according to a new fossil find that reveals broken eggshells and bird bones left over from an ancient flash flood.

The disaster happened in the late Cretaceous Period, about 100 million years ago in what is now Transylvania, Romania. A deluge of water swept through a colony of enantiornithines, a group of ancient birds with clawed wings and toothed beaks that went extinct along with the dinosaurs. The jumbled remnants of the broken colony turned up in a river channel in the Sebes area of Romania three years ago, locked in a chunk of limestone.

The find is important, said study researcher Gareth Dyke of the University of Southampton, because it's the first evidence that ancient birds nested along the water like modern ones do. Not only that, but the limestone block contains remarkably complete egg fossils, representing hundreds of eggs, he said.

"This is the first evidence for actually really well-preserved, complete eggs that actually can tell us about the biology of these animals," Dyke told LiveScience here at the annual meeting of the Society of Vertebrate Paleontology (SVP).

The Sebes area where the eggs were found is a rich ground for paleontologists, Dyke said. Researchers have found a plethora of dinosaur fossils, the remains of ancient crocodiles, and even bone fragments from enormous pterosaurs, flying reptiles that were some of the largest creatures to ever take to the sky, at the site.

The discovery of the drowned bird colony is important because no one had found nesting sites for enantiornithines before, Dyke said. The birds are an extinct branch off the lineage of modern birds, and no one knows why they perished with the dinosaurs while the ancestors of modern birds lived on. Finding a mixture of eggshells, chick bones and adult bones of enantiornithines may help researchers understand the animals' biology better, injecting new knowledge into the extinction mystery, Dyke said.

"Maybe the egg morphology will tell us something about the reproductive biology, and perhaps that was a reason for survivorship of the extinction," Dyke said. "That's one of the reasons this material is interesting, because the eggs are complete and we can actually, for the first time, figure out the size and volume of the egg."

Dyke reported the findings Nov. 3 at the SVP meeting.