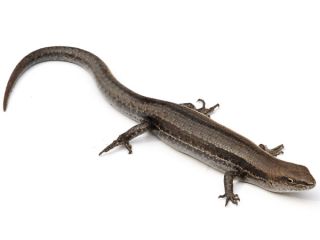 The garden skink, shown above, has not become an invasive species outside of its native range in Australia, even though a similar lizard, the delicate skink, has spread overseas. A study indicates that the species' behavior may explain why one is successful invasive, while the other isn't.
(Image: © Fir0002, flagstaffotos.com.au / Wikimedia Commons / GNU Free Documentation License)

For invasive species, personality matters, according to new research that explores the question why some animals travel to, survive and take over in foreign habitats.

Humans have spread invasive species — starlings, lionfish, Asian carp and fire ants, to name a few —around the world to new habitats, where they can cause trouble for us and for native species.

A team of three Australian scientists observed two related lizards, one of which has successfully established itself as an invasive overseas, and found the invader had traits, such as a willingness to explore, that seemed to explain its success abroad. They also suggest that species whose members show a range of individual variation in their behavior — in other words, animals with more personality — may have a better shot at becoming invasives.

"Personality and behavioral traits are an important and, to date, unexplored component of the success of these species' invasions," said Bob Wong, a researcher from Monash University in Australia and an author of two recent studies on the subject. [Photos: Destructive Invasive Species]

A lot of things have to go just right for an invasive species to be born.

"Not only do animals need to be in the right place at the right time in order to be inadvertently transported by humans, but they also need to be able to survive the often harsh and lengthy journey inside consignments of freight," said study researcher David Chapple, also from Monash University.

"When they arrive at the new destination, the stowaways have to contend with being strangers in a strange land and successfully adapt to new environments. In the face of these challenges, the new colonists must also thrive and reproduce before spreading out across the landscape," Chapple said.

Chapple, Wong and Sarah Simmonds studied the delicate skink, which is the only Australian lizard species to have become an invasive species overseas, including in the Hawaiian Islands and New Zealand. They also looked at the similar garden skink, which has not established itself outside Australia.

After testing and observing the lizards' behaviors in the laboratory, the researchers concluded that the delicate skinks were more adventurous than their garden counterparts, showing more of an inclination to explore their environment. The delicate skinks were also more prone to hide when they found shelter.

This combination may make delicate skinks more likely to sneak into cargo, freight or other human belongings. Once inside, they are more likely to stay hidden, evading border checks and temperature changes that could prove fatal, according to the researchers writing in an article published online Oct. 18 in the journal Ecology and Evolution.

It's important to note that behavioral inclinations alone do not an invasive species make; for example, a hitchhiking species must arrive in a suitable habitat where it can find food it eats.

The importance of personality

While behavioral differences between the two skinks were clear, not all delicate skinks showed themselves to be brave explorers in the lab — evidence of variation among individual animals, otherwise known as personality. As a result, if a group of skinks was given the opportunity to become invaders, only some would likely be successful, the researchers write.

While most attempts to identify behaviors associated with invasive success have focused on species-level traits, some research indicates that variation within a species may enhance its invasion potential, the same team of researchers writes in a separate study, published online Oct. 14 in the journal Trends in Ecology & Evolution.

"As we encroach farther and farther into the natural environment, animals have had more opportunities to jump on board our various transports. Given this increase, and the potential impact on biodiversity, it's important that we understand this phenomenon better," Wong said.