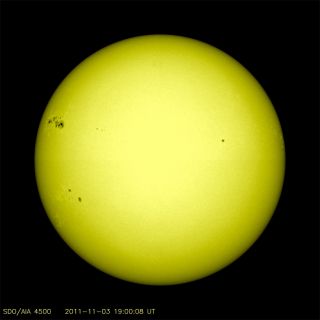 One of the largest sunspots in years has appeared on the sun, darkening part of its glowing face.

The sunspot behemoth isn't yet facing our planet, but was spotted Nov. 3 by NASA's Solar Dynamics Observatory (SDO) satellite. The spacecraft's photos of the giant sunspot show the solar region as it comes into view on the northeastern edge, or limb, of the sun.

When it does turn our way in the days ahead, it should be an "easy target for backyard solar telescopes," according to SpaceWeather.com.

The sunspot is actually a group of nearby darkened spots on the sun, some of which are individually wider than planet Earth.

Sunspots appear when intense magnetic activity ramps up on the sun, blocking the flow of heat through the process of convection, which causes areas of the sun's surface to cool down. These isolated areas then appear dimmer than the surrounding area, creating a dark spot.

The intense magnetic activity around sunspots can often cause solar flares, which are large releases of energy that can actually brighten up the sun. Flares are also accompanied by flows of charged particles out into space, called coronal mass ejections, which can wreak havoc on satellites and power grids on Earth if they head our way.

SpaceWeather.com warns that a huge sunspot like AR1339 comes with a large potential for solar flares. The National Oceanic and Atmospheric Administration (NOAA) forecasts a 50 percent chance of medium-class M solar flares over the next 24 hours due to this sunspot.

In fact, the spot has already produced one class M4 solar flare on Nov. 2 that was observed by SDO. A large coronal mass ejection from this flare was observed, but it was not directed toward Earth. However, as the sunspot turns toward our planet in the coming days, we may be in for a greater chance of these ejections.